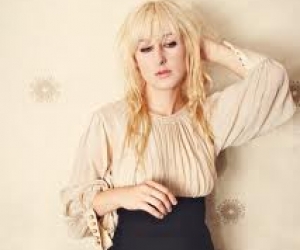 On the heels of her Conatus world tour, Nika Roza Danilova was offered an opportunity to perform at one of the most prestigious modern art museums in the world, NY’s Guggenheim.  Rather than doing her standard Zola Jesus electronic set she decided she wanted to work with a classical composer who could arrange her songs for a quartet. She recruited experimental pioneer JG Thirlwell (Foetus) to do the arrangements.

On August 20, Sacred Bones Records will release the studio recordings of those tracks on an album called Versions.

Since his work as Foetus in the early 80’s New York no-wave scene, JG has been scoring and composing symphonic arrangements for his own project Manorexia, in addition to currently scoring Adult Swim’s Venture Brothers series. If there is a common thread to Thirlwell’s varied musical styles, it is dramatic intensity and evocative, cinematic quality. Thirlwell’s oeuvre runs the gamut from orchestrations, big band, and cathartic noise-rock to abstract electronics, sound sculpture, and chamber music, thus making him the perfect collaborator to help realize Danilova’s vision.

Danilova explains her intentions with this album:

“’Versions’ is about the bone of the music; taking approximations from past records and turning them inside out. With all framework exposed, the songs are given a new medium in which to evolve and bloom into their own tiny worlds.”

The Guggenheim show went over amazingly well with the Village Voice proclaiming that Zola Jesus “conquered the Guggenheim” and eMusic writing, “Nika Roza Danilova’s performance was not confined by the normal genres and subgenres we affix to music, it was truly art.” Removing the bulk of electronics from these songs gives them the space to breathe, thusly opening them up to exist beyond the restrictions of previously imposed genres. Look for select Zola Jesus dates this fall with JG and quartet including a stop at Asheville’s Mountain Oasis Festival.