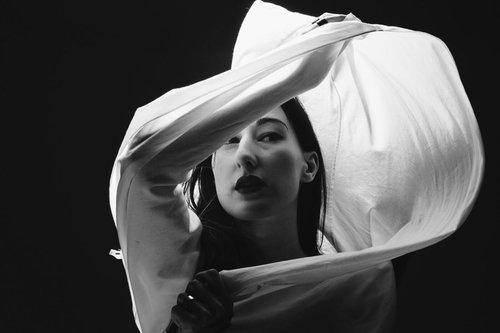 After years of so much explorative writing, Nika Danilova (aka Zola Jesus) had to take time to look after herself. Ahead of making her album Okovi, Zola Jesus returned to her native Wisconsin to centre herself and reset. The result was a deeper record that pulled in all of the sounds that Zola Jesus had been using over the years for something deeper. We caught up with Zola Jesus during her North American tour to talk about mental health, life in the woods and what lead to her companion record Okovi: Additions.

Northern Transmissions: How did personal issues and supporting friends lead you back to Wisconsin, and what ultimately brought Okovi out of you back home?

Nika (aka Zola Jesus): I was living in Seattle just trying to find my footing there. At that time I was very depressed because I was drifting and didn’t have a real place, and sense of home is really important to me. My life was very chaotic and I had no anchor, so I made the decision to move back Wisconsin. It was something I never thought I would do, because I grew up in a small town and you don’t think you’ll go back. Once I went back, everything started to connect, and I felt like I was becoming more whole again. I built this house in the woods and started feeling better. I started connecting to my family more, and then I saw all of them struggling. Feeling that sense of chaos from everybody in my life showed me that no one is in control of their life. That time helped me come to peace with that and Okovi was born from that sense of universal struggle.

NT: Given how much the lyrics of the album deal with the issues you were facing, how do you find catharsis through music or is it really just you talking about the most immediate subjects in your life?

N: Writing is always really hard for me because I’m really self-critical, and it means I’m judging thing as I’m writing them. It got to the point where I felt like life was swirling around and I needed music for the first time in a long time to just make sense of it all. I turned to writing in a cathartic way, which is typical but I’ve used it more over time. Many of the songs allowed me to move through things and understand them more by just laying it all out.

NT: In this way is it difficult to try and relive this time in your life in the live show, and were there other challenges to adapting the album?

N: It is hard to constantly play some of these songs, especially when they have these specific and personal meanings that you relive every night. Some of the songs though are just my singing to myself and everyone else to “Get A GRIP.” There are definitely days where I feel terrible when I get on stage. My life got better when I moved to Wisconsin and then it got WAY harder, and this past year I went through much harder shit than I had before.

NT: How do you feel like your stay out in the woods affected the record itself?

N: A lot of it really is just being alone, and truly alone. I’m really sensitive to the energy of other people. I can be in a city alone but I’ll still feel and hear the people, which can be insidious. When I’m in that house, I’m not thinking about the world outside of that moment, it becomes a microcosm.

NT: Was there any other side effects to life out surrounded by nature?

N: Oh yeah! Almost on a daily basis there were just turkeys hassling me haha I would also just walk through the woods, and then a deer and I would spot each other. We’d both run in opposite directions. Just being surrounded by nature, seeing how things change, and seeing that growth and death, I love it and connect to it. It makes me feel powerful and like I belong.

NT: How did the idea of shackles appeal to you enough to ultimately name the album Okovi?

N: When I was thinking about what this album symbolized, it was about my battle for control. I felt like I was preventing myself from doing something, and there was a kind of wall. Someone close to me was dying of cancer, someone else close to me had attempted suicide twice, and someone else close to me was going through a deep depression. Everyone feels like they have chains on that they can’t escape, and that brings them pain. A lot of the songs spoke to that feeling in one way or another.

NT: Interestingly this record also sounds like a blend of your previous sounds as Zola Jesus rather than the deep dive into one idea, how did this come about?

N: I just felt like I really had the freedom to do that now, and I also wanted to make a kind of journey. My favourite albums have that feeling of going through it. Downward Spiral (NIN) or Low (David Bowie) are these concept albums that have accessible, difficult and atmospheric moments to holistically create a universe. I love those albums because you can deep-dive them and live inside of them. I wanted to put my ideas together in a way that gave different aspects to that world.

NT: What led you to finally release the song’s from Okovi: Additions and what was the impetus for the remixes?

N: The original were supposed to be on the album but the tracklisting just got too long. Some of those songs were my favourite songs that I’d written but they didn’t fit the album, so I had to do some snipping. I was organically getting a bunch of remixes from friends asking around and then I had this pile that I could sort through. It felt like more than a companion piece because I slaved over these songs and my friends made these amazing songs.

NT: How did you want to explore the perspective of a murder victim in “Soak”?

N: Sometimes I’ll make something and just listen to it over and over until I get into its world. It ends up informing me in this way after I write it. Listening to this beat I thought about the perspective of a victim when they know they’re not getting out of it alive. Then there was the complexities and nuances of feeling sympathy for the killer, even though they’re taking a life. All those different things that run through your mind while you’re also panicking about dying. It also made me think about the female experience where you have a feeling of resignation or martyrdom. You feel like you’re mothering, I’ll never let you down, I’ll be this victim for you. You have all those paradoxical feelings in the moment.