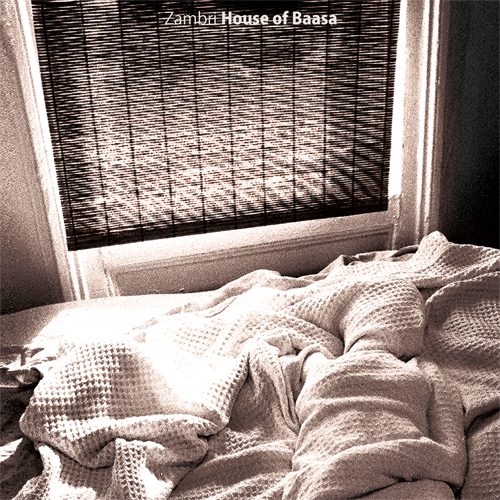 Some people probably think it’s irresponsible to do no research on the artist you’re reviewing for a music blog. I can’t disagree more vehemently : the less I know about the band I’m assigning a score, the better. There’s no way I can let any notion of “cool” or “history” influence my opinion of the songs if I don’t have a clue where they’re from, how long they’ve been a band, or if it’s even a “they” as opposed to a “she”. I’m also never impressed by a band’s story. You got sick and went to a hunting cabin for the winter? Who cares?

Have you worked out what I’m saying? I don’t know who Zambri is. I don’t know where Zambri falls in the “RIYL” circles, other than the inspirations and connotations I’m gathering on my own two feet. I’m trying my darndest to not look up what label is releasing this album, and I don’t even know what the artwork looks like.

This last point is controversial. Album artwork, branding, and presentation of the record are all, in my mind, crucial factors in my enjoyment of a long piece of music. When I listen to House of Baasa, I’m not looking at the brilliant (or dull?) colors that wash over the front of the LP–or flicker in the bottom-left corner of my iTunes. I’m left to my imagination.

So what does House of Baasa remind me of? First impressions… a circus. Not off to a great start. The oompah-doompah-ing of “Carry” repeats endlessly like a clown car circling round and round the big top. I don’t know why so many bands try this sideshow freak thing. And I really don’t understand why so many bands are celebrated for it. Man Man is the guiltiest party that comes to mind. Circuses are supposed to be fun! This isn’t fun! This is just… annoying.

Zambri falls somewhere in between every modern pop songstress and every modern alternative goth band. “Hundred Hearts” seriously sounds like a complete rip-off of any song from St. Vincent’s debut Marry Me, only it’s now obviously dated and boring. “All You Maybes” is reaching for the kind of grandoise weirdo vibes that the School of Seven Bells emit in their enchanting performances.

It can come across as lazy, to reduce a record to comparisons to other trends that are going on in modern indie rock. Truthfully, though, they’ve dug their own grave: it’s hard to escape some influences when they’re just beating you over the head with them.

Having said that, not all the obvious influences are unwelcome. It’s hard to go wrong with Kate Bush. But dammit, do something to it. “From the Starts” shows some potential. The synth tones are interesting, but that and some pawn-shop guitar station production aren’t enough to hold my attention for a full-length album.

If I had to guess, I would say this band is from Brooklyn, New York.

After a quick research session it’s come to my attention that they are indeed from Brooklyn, New York. For a city that calls itself the Center of the Universe, I can’t remember the last time I heard a band that was truly creative or original from that town. As I gaze now upon the artwork for the LP for the first time, it’s unfortunately accurate. Somebody took a picture of a bed and a window with light coming through it, tossed the artist and title on the top and called it a day.