“Then You’re Gone” by Century Palm

Century Palm have premiered a new video for their track “Then You’re Gone”. The song is taken from their upcoming debut album “Deranged”, which will be available March 10th 2017 via Deranged Records.

On the track the band stated that “It’s about the passing of my friend Scott Luit, who lived in Calgary. In 2013, I made a 4-day stopover there to play Sled Island with Ketamines and Zebrassieres. Scott and I had plans to meet up, but unfortunately a wide-scale flood was in its early phases. Heavy rain caused Calgary’s rivers to overflow and most of downtown was evacuated. The rest of Sled Island was cancelled, large parts of the city were cut off from electricity and traveling around Calgary wasn’t recommended, or even possible in some parts. Because of the flood we had to cancel our plans, thinking we’d see each other next year. Not long afterwards, Scott suddenly passed away, and “Then You’re Gone” is about that shocking moment when I realized I wouldn’t be able to see or talk to my friend again. You can’t always assume there will be a next time.”

Century Palm was initially formed by vocalist/guitarist Andrew Payne in 2014 following the dissolution of Ketamines, a cult favourite garage-pop band founded by bassist Paul Lawton that featured 3/4ths of the eventual members of Century Palm (Lawton, Payne, Penny Clark & Jesse Locke) in one or other of its various iterations. Comprised of long time fixtures of the Vancouver and Calgary music scenes, with members playing in bands like Tough Age, Zebrassieres and Dirty Beaches, the group reconnected in Toronto after independently relocating to the city, and quickly began to capture the interest of local audiences, appearing on bills with bands from the thriving local post-punk scene like Casper Skulls, Fake Palms and Vallens, and touring acts like Nap Eyes and Ultimate Painting.

A few words from the band on their debut LP:
“We wanted to take our time on it and we did a lot of experimenting,” he says, “it was very open-ended, and we re-tracked some of the songs multiple times, which I think is an element of our process that had a really positive impact on the end result.” 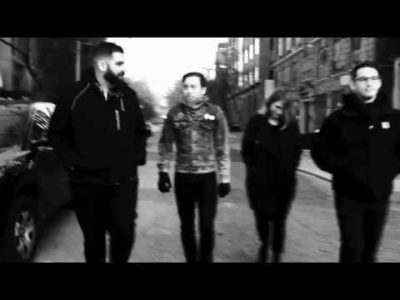