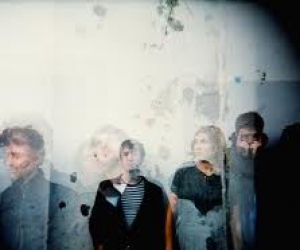 Montreal’s Young Galaxy are set to release another single from their acclaimed album Ultramarine. ‘In Fire’ will be released on July 23rd backed by a remix from label-mates Sally Shapiro. Listen to the remix above. Young Galaxy will be touring across North America in September and October including shows in Western Canada with more dates to be added soon.  Chicago’s Mister Lies will be supporting the band in the US.  Full list of dates below. Ultramarine has been included on the short list for this year’s Polaris Music Prize.

Ultramarine is the name and colour of Young Galaxy’s fourth LP, the first album they have made away from Montreal, across the sea, all together. Like 2011’s Shapeshifting, Ultramarine was made with electronic producer Dan Lissvik (Studio); but this time it was made in Gothenburg, Sweden, at Lissvik’s studio; this time five musicians stood in a room with Lissvik, playing their instruments; this time every song was sung by co-founder Catherine McCandless.