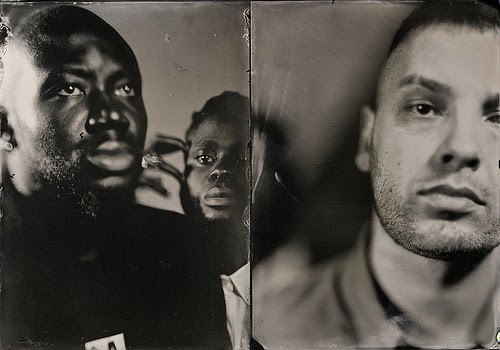 Young Fathers has also announces a run of UK headline shows for 2018. Tickets for all shows go on sale Friday, November 3. The full dates are below with further information available from: http://www.young-fathers.com. Look for North American 2018 tour date to be announced soon. Young Fathers are are comprised of ‘G’ Hastings, from Edinburgh, Alloysious Massaquoi, originally from Liberia via Ghana and Kayus Bankole, born in Edinburgh to Nigerian parents but partially raised in Maryland, USA. Their live shows are complimented by Steven Morrison on drums.

The group formed after meeting at an under-16s hiphop night at the infamous Bongo Club in Edinburgh when they were all in their teens. Almost immediately they started writing and recording together, initially on an old karaoke machine plugged into a cheap cassette recorder at G’s parents house.

In 2011, they set about recording a mixtape TAPE ONE in just over a week, finishing a track a day and having it available for download within two weeks of recording. They quickly followed this up with TAPE TWO, which was written and recorded in a similar fashion. Los Angeles based label, Anticon, discovered them online and within a few months had signed them for a short deal that saw both TAPEs officially released in 2013.

After winning UK’s Mercury Prize, Young Fathers travelled to Berlin where they continued making a new album in a freezing basement in a building near the railway yards. Returning to the more familiar (and warmer) basement studio in Edinburgh to finish their critically album White Men Are Black Men Too, which was released in April 2015. In 2016, they played at Coachella among other festivals, and were invited to support Massive Attack on their UK and European tour after working together on Massive Attack’s single “Voodoo In My Blood”, which was released in January 2016.

Earlier this year, Young Fathers wrote the song “Only God Knows” for the film Trainspotting T2, where they had a total of six songs featured in the film and soundtrack. Director Danny Bolye noted, “Their songs are my heartbeat for the film. And ‘Only God Knows’ is that rush again. The ocean. The heart.”