It has been a bit of a blur, but last week, The BBC’s Nick Grimshaw opened an envelope and Young Fathers were announced the Winner of the 2014 Barclaycard Mercury Music Prize for their album DEAD. The Edinburgh-based trio — comprised of Alloysious, G and Kayus — gave a very short, polite acceptance speech, followed by a succession of interviews where everyone except the band seemed surprised by the band’s win. “Awards and stuff like that – they’re not telling us anything that we don’t already know.” G stated after the awards ceremony.

For the newcomers: Young Fathers are three young men from Edinburgh and Liberia and Nigeria, all at the same time. Their journey has taken them through various incarnations and styles but they are still only in their mid 20s. Following two acclaimed mixtapes — TAPE ONE and TAPE TWO — their debut album DEAD was released earlier this year as a part of the first ever collaboration between West Coast indie label Anticon and the UK’s Big Dada.

An intimate epic, the LP was thirty six minutes of… well.. we’re still trying to figure that one out. You can call it hip hop or rap, but Alloysious, G and Kayus sing more than they rap. The sounds of suburbs and the cities of Great Britain are in there rubbing up next to sounds of diverse regions of Africa. There’s an obsession with the surface texture of sound and a psychedelicist’s love of noise. Equally, the deep, warm, maternal reassurance of bass. But the band also craft hook after hook, instant kid-melodies, piling them up on great reefs of backing vocals. Above all, Young Fathers insist that their music has to mean something emotionally. If this is a wake, it’s a celebratory one, full of heart.

Following their Merucry Prize win, the band is already hard at work in Berlin on their follow up to DEAD, funneling the £20,000 they won back into the record. What the album will end up sounding like is anyone’s guess. But what is sure is that band will continue to forge ahead, pursuing their own single-minded sound.

This spring, Young Fathers will return to the U.S., playing their first U.S. headlining slot at Music Hall of Williamsburg on April 10th. Tickets can be purchased here at noon EST. The band is in the midst of finishing up their current European tour dates. Full dates below. 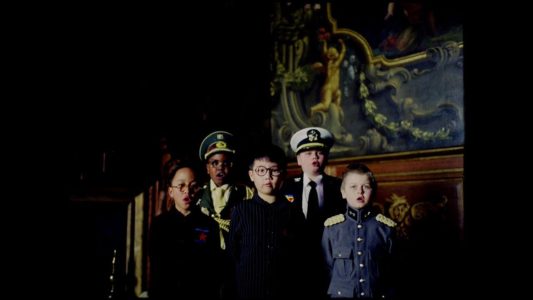