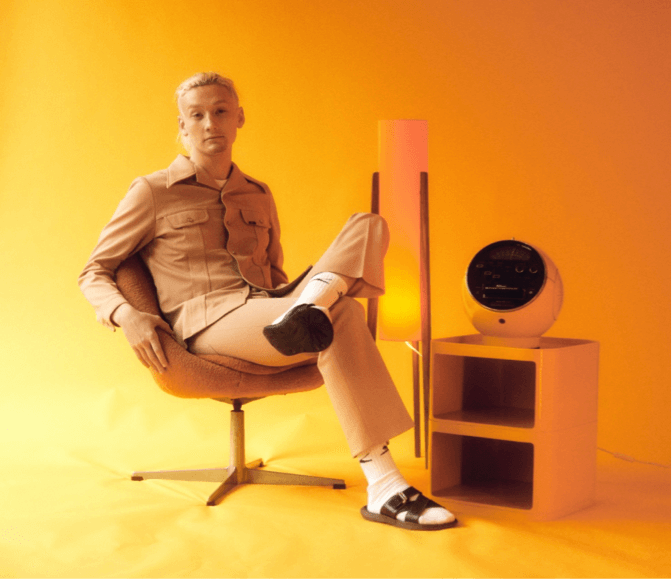 Yellow Days will release his new album A Day in A Yellow Beat on September 18th. Ahead of the album’s release, Yellow Days has shared The Curse,  featuring long-time friend and collaborator Mac DeMarco. A more sombre affair lyrically than its predecessor, ‘The Curse’ still holds tight to the woozy mixture of soul, blues, psych, and groove that you’ll hear across the album. Visually, the video directed by Charlie Robins, shows the behind the scenes, stripped back look at a green screen footage where CGI animation turns George and Mac into computerized images amidst glitchy, broken footage. The futuristic elements sit in direct contrast to the nostalgia laden sound the song emits. Once again, illustrating Yellow Days’ ability to makes his music feel both of his era and completely of another.

Along with the new collaboration, Yellow Days has announced a live tour for 2021. As someone who thrives on the live stage (and having not played a gig since an AMP night at The Jazz Café in October ’19) George is incredibly excited about getting this new record out on the road. On his last tour he sold out Brixton Electric and played two completely sold out runs across Europe and the US. Festivals were also very much part of his playing ground and included performances at Coachella, Primavera and Glastonbury amongst others.

Having previously released music produced out of his garden shed in surrey, Yellow Days has spent a lot of time writing and recording this current wave of music in LA with a whole host of artists and musicians – many of who play for Raphael Saadiq, Frank Ocean, Weldon Irvine, Kanye West. In doing so, George has taken it back to a more traditional way of making music – from hand-picking the collaborators, selecting the perfect studio setting to recording everything on analogue, vintage gear; all of which has vastly enhanced the sound Yellow Days is now capable of creating. By overseeing the production process, George is more in charge of his own fuzzed-out, technicolor vision than ever. “This is really my first record where I can let it fucking all out,” he says.

Yellow Days
A Day in a Yellow Beat
Tracklisting

Intro
Be Free
Let You Know
(The Outsider)
Who’s There? (feat. Shirley Jones)
Getting Closer
Come Groove (Interlude)
Keep Yourself Alive
Open Your Eyes (feat. Shirley Jones & Nick Walters)
! (feat. Bishop Nehru)
(Pot Party)
Keeps Me Satisfied
You
(What Goes Up Must Come Down)
The Curse (feat. Mac Demarco)
Let’s Be Good To Each Other
Whatever You Wanna Do
Something Special (Interlude)
So Lost
I Don’t Mind
(Mature Love)
Treat You Right
Love Is Everywhere