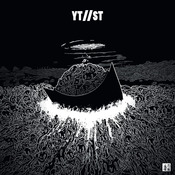 There is simply no band in the world like YAMANTAKA // SONIC TITAN. The Canadian group mix culture, musical genres and sexuality to produce their unique and electrifying blend of music and performance art. Now signed to Suicide Squeeze, YAMANTAKA // SONIC TITAN will be re-releasing their critically acclaimed YT//ST this July. The band created a short documentary chronicling their work and interaction as a collective, as well as insight into the creative process. The band is currently putting the finishing touches on a new record with more information to follow.

YT//ST was founded in late 2007 by performance artists Alaska B and Ruby Kato Attwood, born from the ashes of the late Lesbian Fight Club. Armed with mixed-race identities, mad illustration skills and a whole pile of home-brew junk electronics, Alaska and Ruby wrote and performed the first mini ‘Noh-Wave’ Opera, ‘YAMANTAKA // SONIC TITAN I’ in April 2008. YT//ST continued to perform short homebrewed operas, eventually forming a network of Asian and Indigenous artists through collaboration and formed the current YT//ST collective. Montrealers had come to know YT//ST by their dazzling musical theatre performances in giant monochrome paper sets, sometimes in far out places, like the Montreal Eaton Centre Food Court at 2AM. Aesthetically, they blend the poorly appropriated styles of Noh, Chinese Opera, Chinese, Japanese and First Nations Mythology, Black & White Television, Psychedelia & Rock Operatics into a sensory feast of nigh-monochromatic costuming, unique hand-built musical instruments and their own mangaesque cardboard ‘NEVERFLAT’ style of 2.5D set design. YT // ST continues based in both Montreal & Toronto.

Yamantaka // Sonic Titan released their debut album YT//ST on October 8, 2011 through the record label, Psychic Handshake Recordings. The album quickly gained popularity, garnering press and acclaim in Canada, The United States, The UK and Japan. The band was invited to play the All Tomorrow’s Parties (ATP) festival series in Minehead, UK. The band also undertook a North American tour in May 2012 in support of Xiu Xiu. YT//ST was short-listed for the Polaris Prize and they were privileged to perform their music at both the Art Gallery of Ontario and the Montreal Contemporary Art Museum. The band contributed a song, “Mark & Blade” to the soundtrack of Klei Entertainment’s “Mark of the Ninja,” while currently in the midst of creating their very own action shooter video game entitled “Your Task//Shoot Things” replete with their own backing music. The band also released the single track “Lamia” as part of the 2012 Adult Swim Singles Program. All the while, Yamantaka//Sonic TItan performed an opera they wrote called ‘33’ at Pop Montreal Festival in 2012 to critical acclaim.

After parting ways with Psychic Handshake, the album was re-released in Canada through Paper Bag Records on September 11th, 2012. The band joined forces with Suicide Squeeze in early 2013 and the label will be re-releasing YT//ST July 16, 2013 in anticipation of the band’s sophomore album, due for release later this year. The collective continues to function as a mutating and constantly evolving art cult that brings together individuals of Asian, Indigenous & Diasporic identity to perform/create as a collective. Working in multiple mediums including Installation, Theater, Music, Video, Animation, Illustration and Design, YT//ST negotiate cultural clashes between dominant cultures and those whose traditions are oppressed, erased or being eclipsed. They retell the mythologies, customs and stereotypes of their ancestors with their cartoon bodies as their vessels.