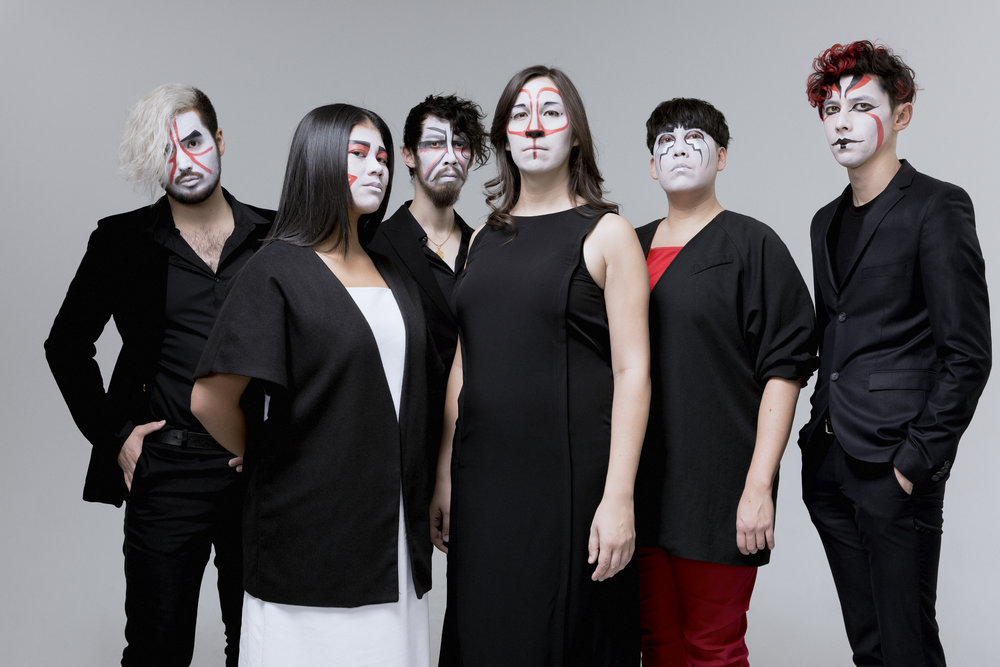 After what may have seemed to many as a five year hiatus, Yamantaka // Sonic Titan returned this year with their third album Dirt bringing their Pureland saga to new heights. With a powerful lineup change and a video game soundtrack under their belts, the band found their voice again to make their most sprawling record to date. We caught up with drummer and creative powerhouse Alaska B ahead of the band’s Vancouver set at the Biltmore Cabaret on May 18 to talk about their ever changing world and how they created their record by designing a film first.

Northern Transmissions: It’s been about five years since you put out Uzu so what led to the big break between records?
Alaska B: It was mostly just the lineup change and working on Severed, that took over two years to do. After that was the whole recording period for Dirt, and in that period I actually scored several smaller films. We really took our time with it, I also had a back injury so I wasn’t really able to play the drums for some time. We held off releasing Dirt and touring for a whole year because of that.

NT: How did you get involved with the soundtrack for the game Severed and what did you learn from that experience?
AB: We were working on a project that was ultimately shelved, which was a game set to music. During the development process we had talked to some developers, including Drinkbox and then they got in contact with us. They told us they had this new game idea coming up, and they thought our sound would be perfect for the game and that they were really interested in what we could come up with. Then we had meetings, we felt the themes and design of Severed fit well with our aesthetic. It was an interesting project writing for someone else’s world rather than our own. It was also cool because Severed is a very colourful game where as we’ve mostly kept to black and white.

NT: Speaking of soundtracks you’ve talked about conceiving the album as a Buddhist/Haudenosaunee anime soundtrack, so how did you want to capture this in the music itself while still taking the story forward?
AB: This album was very specifically written around the narrative from beginning to end. This album was developed first as a concept for a film before we’d written any music. This was trying to hone in very closely on a storyline. We wanted to be more pointed and direct with our writing on this one. We’ve done something similar with our opera 33, and we feel like it’s fair to something broader. It’s a big contrast to Severed though. With that we were writing for a huge world with non-intrusive sound-scapes and no lyrics to form the background to the story. While in Dirt, without all the visuals and puzzles to engage with, we felt like we wanted to get straight and to the point. We wanted to make straightforward songs, and it was very verbose because of that.

NT: This album is also the third in your Pureland story, do you think you’ll keep following that narrative or have you thought about looking at other stories considering you’ve been talking about your new album already?
AB: Dirt has actually been finished for well over a year, so we’ve been chipping away at new ideas in the mean time. I feel like I don’t see any of our stories leaving the Pureland universe at this time. It was definitely fun working on the Severed universe, maybe they’re connected, I’ll have to ask. We’d be interested in collaborating, but ultimately our records focus on that world. Pureland isn’t really another planet, it comes from a Christian missionary influence, where if you’re pious in life you can focus on enlightenment after. I find that idea offensive, this kind of cash-in, cash-out idea of karma. Think of how many bad people are still around. We imagine it in our own way, through more of a sci-fi lens. Our image of Pureland is one that is always under threat and we do that through parables about our own planet.

NT: I was curious given your multi-disciplinary talents if you could speak to how the narrative design behind the record happened and how much story and art you made before diving into the music itself?
AB: There was a lot of time spent working on it like we were actually developing a film. I have a background in animation, so there were storyboards, character design and arguing about plot. Then we started conceiving the sound of the record. A lot of people say our sound changes dramatically between records, but it’s because we’re writing for a new world and it’s a new story each time. The way we conceived this one of being a late 80’s anime, bootlegged and released in Canada, with this metal aesthetic. We wanted it to feel much more straightforward too.

NT: I also understand Sheer Heart Attack by Queen guided you direction wise on the album?
AB: I always thought of the first Queen records as this dramatic evolution. You get to the first one where they lay down the foundation, then Queen II is really grandiose and over-the-top, then Sheer Heart Attack is lyrically and aesthetically more about real people. That shifted them to the push and pull of progressive rock and stadium anthems. You can see it in a lot of bands in the 70s. There were always plans to start with a catchall record, move to something more emotional and then have the third be this heavy, mean record.

NT: How did Joanna, Hiroki and Brandon come to join and what do they bring to the band?
AB: Jo we met through Pantayo, which is a band we met through the Severed soundtrack. When we needed a new vocalist, Jo auditioned and things went really well. We’ve known Hiroki for a very long time, they were actually at one of the first Yamantaka shows. I’d always had him in mind, so later when we needed guitar, he had just moved to Toronto from Montreal. He brings a lot of technical skill. Him along with Brandon, he’s an amazing keyboard player and those two really mesh well together. Brandon was recommended by our friend April who had done rehearsals with us but then recommended Brandon because she was too busy.