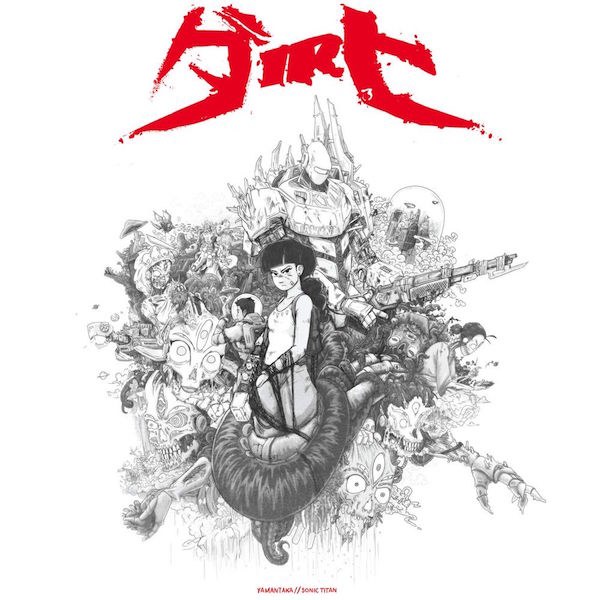 The most beautiful thing about pop is how hard it can be to define. Despite all their theatrical and angry edges, the rock powerhouse of Yamantaka // Sonic Titan is brimming with strong pop sensibilities and a subversion of what you expect of any genre. Through seemingly boundless energy and a fearless sense of song writing, Yamantaka // Sonic Titan crafts their greatest album to date.

Through a massive swell of drums, organ and whatever else the band could find, “Karonhiake” opens the album with a blistering rush of instrumentation. Like the many cinematic orchestra pieces that you might hear in a Tarantino film, the track’s aggressive energy creates a sense of classical majesty that is all too rare in music these days. Interestingly enough however, “Someplace” turns into a much dreamier and trippy sound, as flickering guitars set the pace for washes of ghostly harmonies. After their patient build, they release it all into a solo full of fiery drums and strange, exotic voicings.

“Dark Waters” does extend its time-warped intro longer than many would deem necessary but the barrage of percussion and guitars that follows is well worth it. Their heavy metal fury mixed with Karen O and Santigold like melodies creates a sound that can’t be matched. The flurries of bass are surprisingly potent on “Yandere” as the endless avalanche of sound goes on. While the relentless charge can feel tiring at times, the synth pop choruses are a welcome surprise.

This subverted pop sound permeates “The Decay ” beautifully, as lush harmonies and electronic frenzies dance behind walls of feedback and distortion. Though it definitely starts with the energy of a dramatic interlude, the band’s grandeur cleverly transitions into a massive climax that evolves the energy perfectly. Tones of “YYZ” lie under the strange syncopation of “Beast” as a gritty and grimy energy flows out of the band. The animal-like cut through violently and give the song a primal and ritualistic spirit.

“Hungry Ghost” swirls with crooner pianos and a classical mix of strings, all elevated by a Blondie-like vocal delivery that is utterly intoxicating. Although here the mutation to a metal energy feels much more perverse and notably less coherent. “Dirt” sheds a lot of the softer pretense of many tracks on the album, and finds the band shredding and shrieking freely. Though this makes for a sonically straightforward track, the band will undoubtedly make this one of high-points of any live show they perform.

Through a cloud of howling vocals, “Tawine” kicks out like a John Carpenter theme, most notably In The Mouth Of Madness. The shift to a synth bass and much more pop-centered writing overall sees the band’s unique energy and sound shining through in new and unprecedented ways. “Out Of Time” jumps back to the heavy chug of rock, but this time with a bit of Queen and a clever handful of pop hooks to take the album out on its most ecstatic and ballistic note.