“Write it on your Heart” by Bad Bad Hats 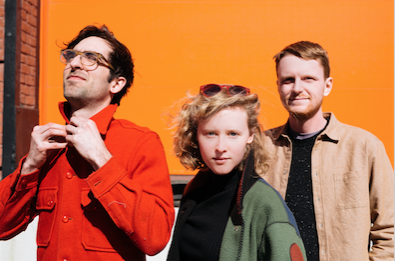 Lead single “Write It On Your Heart” is a reflective song about the end of a relationship, where the ender of the relationship wants it both ways: they want to leave you for someone else, but they want your blessing too. “I haven’t always stood up for myself in situations like this,” shares frontwoman and lyricist Kerry Alexander. “So this song is an ode to the version of me that does.”

Bad Bad Hats are Kerry Alexander (vocals, guitar), Chris Hoge (guitar and bass), and Connor Davison (drums). Encouraged to record live in the studio by producer and longtime collaborator Brett Bullion (who also produced their debut album Psychic Reader), there is a tangible vulnerability to the spontaneous approach (fluttering tape loops, a few wrong notes) which feels as honest and unpredictable as Alexander’s lyrics.

Since the release of their debut album, the indie rock trio has toured extensively, sharing stages with The Front Bottoms, Margaret Glaspy. They head back on the road next week, kicking off a summer tour including stops in NYC, LA, Boston and Chicago.