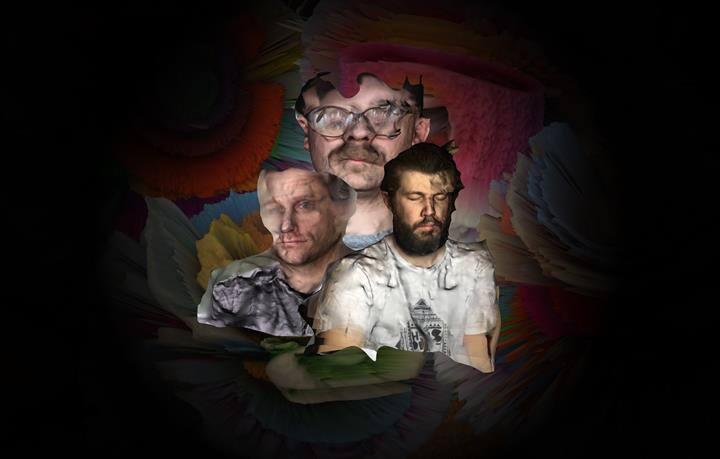 After the release of their b-side “Waster”, WIN WIN is back with a new video for “Couch Paranoia”, the Brooklyn band’s first release after signing with Arts & Crafts. WIN WIN is Alex Epton, Chris Devlin, and Ryan Sciaino. They explain their creation of the video for “Couch Paranoia” as “an exploration of the interactions between analog and digital systems in both our music and art”. WIN WIN applies analog inputs of human faces and swirling paint to a digital system of dense 3D mesh, creating “the appearance of something that’s alive but moves in an alien, unfamiliar way,” the band explains. “The video and song both attempt to simultaneously elicit reactions of revulsion and fascination.”

A group that presents itself first as lifelong friends, second as collaborators, and third as a band, WIN WIN has built its reputation on its far-ranging production work. Epton (xxx¢hange) and Devlin first met growing up in the early 90s, beginning their musical work together in 2004, serving as producer and DJ, respectively, in Baltimore party-rap outfit Spank Rock. The pair met Sciaino (DJ/video artist Ghostdad) in 2006. With the creative triangle complete, complicated mix tapes soon evolved into WIN WIN’s sample/guest-heavy self-titled debut (2011), and the software mind of sophomore LP Double Vision (2012). Now set up at Flavor Factory studio in Sunset Park, Couch Paranaoia suggests WIN WIN’s most instrumental, tactile, and psychedelic music to date. WIN WIN in various combinations has produced music, visuals, or live shows for Prince Rama, Porter Robinson, The Kills, Peaches, and more, with official remixes for Thom Yorke, Björk, TV On The Radio, Kylie Minogue, and on.