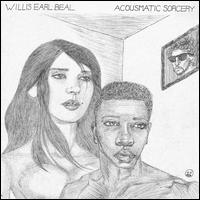 It’s telling of a record when you glance at the track listing and certain song titles typify the LPs overall appeal.Willis Earl Beal has a unique talent as this young musician has compiled an ambitious record with a vocal that veers from guttural soul-blues to quick fire rap while incorporating obscure minimalist sounds. This debut offering by Beal, which carries the beguiling title Acousmatic Sorcery has two tracks called, ‘Cosmic Queries’ and ‘Monotony’ that paint the picture of a record that conveys otherworldly tendencies while ultimately sounding monotonous. However, the general appeal throughout Acousmatic Sorcery is an album that is more content being outlandish than it is organic.

The album chimes forth with instrumental opener ‘Nepeneoyka’ which is a menagerie of tightly plucked strings that sound almost out of tune once they twist and collide. This jarring beginning paves the way for ‘Take Me Away’ which demonstrates the earthy tones Beal possess when he is in full blues-soul swing. The music swirling around his gravelled vocal sounds not dissimilar to a steam locomotive chugging and whirring into motion. Beal’s vocal dips from rasping to what can only be described as a man gargling with Tabasco sauce, but this rough vocal manages to spoil the track as it just sounds like a man shouting.

From here the repetitive nature of this LP unfurls, the sombre ‘Evening’s Kiss’ is just Beal’s calmer voice twinned with a recurring chord progression chiming in the background. One track that saves the record is ‘Swing On Low’ which is bolstered by what sounds like metal being bashed against glass which provides a piercing percussion line that supports Beal’s half rapped delivery.

The ingredients are there with Acousmatic Sorcery; however it’s the albums execution which needs refining.When Beal aims for the sparse he falls short, equally, when Beal ramps up the tempo, he doesn’t quite hit the mark in the same way The Roots do. One lyric that epitomizes this LP is, “Cocoa butter on my hands/Pot pourri on my pants” as this is a metaphor for how slippery it is to grasp, whereas the overall essence is either overpowering or in the wrong place altogether.