Lost Tribe Sound has announced the upcoming release of William Ryan Fritch’s Revisionist, out February 10, 2015. To usher in the new release, Ryan has premiered the first single “Heavy,”

Ryan Fritch is a composer, but he isn’t comfortable with that term. He has little in common with most contemporary composers. Most ambient, minimalist, and modern classical music leaves him wanting, and he’s clueless when it comes to that electro-acoustic shtick, though he is often grouped into that category. Until a few years ago, he couldn’t read a lick of music. He still has nightmares about having to sight-read a piece of music in front of an audience, pants or no pants.

With little to compare, it’s difficult to put Fritch’s aesthetic into a box. He has had to contextualize himself as a composer so that he could be taken seriously, but he is no architect. He is a homesteader, a laborer who doesn’t have the base skills, patience or willingness to manufacture someone else’s plans, yet feels a deep, unrelenting desire to build things with only himself and his modest skills to rely on. He employs no virtual instruments, plugins, or libraries, just a bunch of raggedy, second-hand instruments he constantly recontextualizes in his studio, the compositional content of every piece flowing from the originating sound itself. The pieces don’t exist separate from the arrangements; they are the arrangements.

“Our physical laws do not in fact generate anything. They serve only to describe regularities and consistent relationships in nature. I embrace the notion of there being no immutable truth, that in its absence is an endlessly nuanced and novel experiential universe which-by eclipsing our feeble processing-leaves us innervated, enthusiastic of our unknowing.” – WRF

Following his work with Sole and the Skyrider Band, as well as his recent collaboration with Volcano Choir drummer Jon Mueller under the name of Death Blues, Fritch called on the likes of Benoit Pioulard, D.M. Stith, Origamibiro and Esme Patterson to help realise his latest album, Revisionist.

The cover art of João Ruas reflects the album’s theme. It’s a depiction of the Greek character Arachne, a great weaver that was so overconfident in her abilities that she proposed that she could weave more beautifully than the gods themselves, leading to a contest with Athena. The myth then historically splits into two tellings: one where Arachne wins, but her hubris is punished by Athena, who shreds the tapestry and turns her into a spider so that she and her descendants would have to weave for all time with their insignificant threads, and another where Arachne loses, and is forbidden from touching a loom or needle ever again, in which case Athena turning her into a spider would be seen as an act of pity.

“The record explores the psychology of revisionism and its impact on how we personally and collectively frame and brand life events in our diegetic history to make for more retroactive continuity, manifesting both as denial and as critical re-examination. We forget evil, distort those aspects of history we find uncomfortable. If we can skim or paper over uncomfortable truths, we will, and those who tell the stories also hold the power.” – WRF 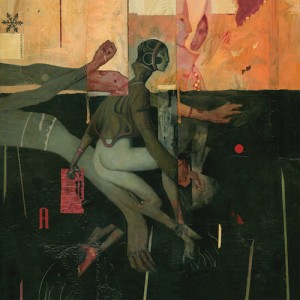