Wild Ones Premier “From Nothing”, Tour News 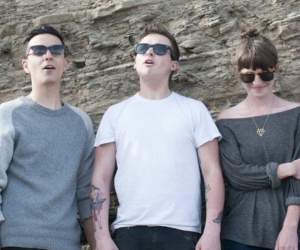 Portland, OR five-piece Wild Ones have premiered their song “From Nothing” today. As they prepare to kick off a string of western state tour dates including shows with Typhoon and Tim Kasher. “From Nothing” comes from their debut album Keep It Safe, out now on Party Damage Records. Lead singer Danielle Sullivan’s vocals are that rare blend of sweet and sour, and they pair exquisitely with the peppy yet slightly morose electro pop on Keep It Safe, a record that almost didn’t see the light of day.

In late 2012, Wild Ones was on the verge of collapse. Guitarist Clayton Knapp had blown out an eardrum, the band’s original drummer left the group and his replacement, Seve Sheldon, was in the hospital with a punctured lung, practicing songs on a drum pad with a tube sticking out of his chest. The band’s members had funneled all of their money into a debut record, Keep It Safe, that had taken a year to write and nine months to record and mix. It was make-or-break time. Wild Ones made.

Instead of folding, Wild Ones took a deep breath and adjusted to its new surroundings. This band is used to adjusting. Since its formation in 2010, Wild Ones has insisted on operating as a DIY collective. The band recorded and mixed its debut as a group (with help from engineer David Pollock). Sometimes considering each members’ opinion meant endless revisits and tweaks to the album’s tracks. The process was time-consuming, but it was also worth it.”