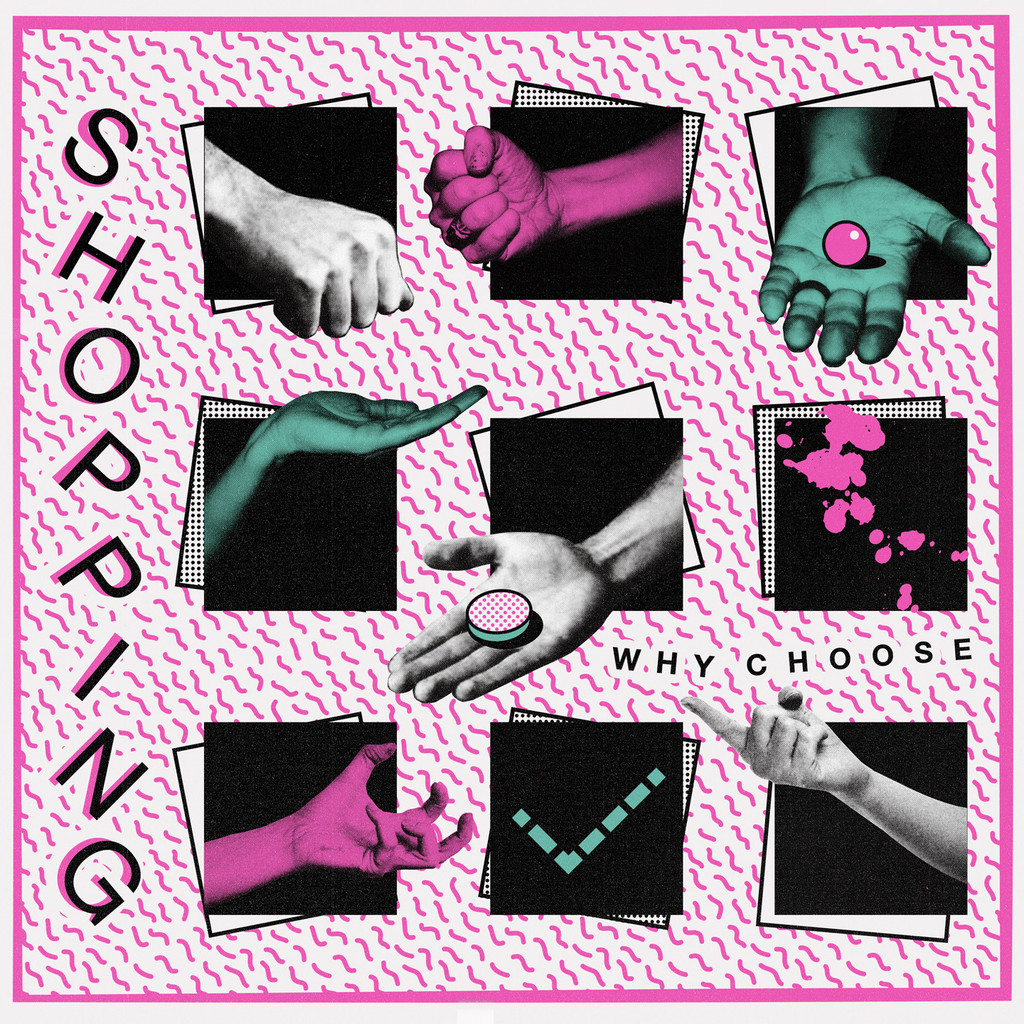 Londoners and Covergirl bandmates Rachel Aggs (vocals, guitar), Billy Easter (bass), and Andrew Milk (drums, vocals) consolidated as the DIY, indie post-punk trio Shopping in 2012. They recorded, pressed, and hand-delivered their debut album, Consumer Complaints, to London record stores in 2013. Shopping has been tagged as a ‘political’ band due to song commentary on the avaricious nature of modern capitalistic culture, but the band members have stated that it was not their intent to be labeled as such. They write about what they know and that includes societal, as well as relationship, issues. Shopping’s sophomore album, Why Choose, is set for release October 2nd on FatCat Records.

On Why Choose, Shopping crafts tunes with a sharp economy and brevity, in the main utilizing the instrumental basics of guitar, bass, and drumkit. Rachel and/or Andrew sing-talk or exclaim the short-phrase lyrics in a no-nonsense vocal tone. Briefly played guitar riffs, bass lines, and drum patterns are recycled to the point where many of the song structures and instrumental sounds begin to sound samey. What adds some pizzazz to the proceedings are the antsy tempos of the drum beats, the intensity of the wiry guitar lines, and Rachel’s confident, gutsy vocals. There’s an admirable rough-hewn directness and simplicity to the tracks, but over the length of an album, the charm and interest begin to wear thin.

Out of the dozen tunes, three outright address the issue of money in the current cultural context. Centerpiece song and album title raison d’être “Why Wait” is Shopping at its best, lyrics-wise, with Rachel declaring matter-of-factly “Why wait / when it’s all at my fingertips.” and “Why choose / when I could just take it all.” That wrongfully rightful attitude of immediate gratification and self-entitlement runs rampant on the track amid a fast-smacked drum beat, trippingly picked, angular guitar line, and rebounding bass line. Economic excess and the paranoia it can induce is in the spotlight on the dancy “Private Party”. The supple guitar and bass lines loop around a steady, but up-tempo drum beat and knocking percussion. Rachel and Andrew alternate their vocals, sing-talking tersely and dispassionately about saving up and locking up money, but then having to hide away because “You’re on the run / ‘cause they’re out to get you.” Hmmm, would that be the government wanting its cut or the destitute masses needing the currency?

Money and love mix on “Straight Lines” which takes a look at a relationship where the protagonist with the cash gives his partner “My life / my love / my money / I gave him what was mine.”, but ends up with little to show for it. Andrew speed-talks through the verses and Rachel comes in on the chorus, inquiring “Why’d you go away? Saw you with another guy…” The shaken drum beat matches Andrew’s swift intonation while the agitated guitar line traipses over the slower, lower bass line. Other songs touch upon variety of subjects, including people who talk even if they don’t have anything to say (the lean and pummeling “Wind Up”), time-wasters with nothing left at the end (“Wasted Time”), short fuses who are ready to fight (the rudimentary “Take It Outside” which actually incorporates a tiny bit of synth!), and those that have the will-power to change (“Say It Once” which builds to an exhilarating cantering pace).

The remainder deals with demise of relationships including standout track “Passing Through” which contains longer sections of lyrics (“Will I ever see you again? / You’re like a song that got stuck in my head.”), more expressive, scrambling guitar lines, and lively rhythms. On the straightforward “I Have Decided” Rachel proclaims that she will move on since the one she loves refuses to change. Andrew appears midway, talking in the background amid the deep tug of the bass line, wiry guitar motif, skittering percussion, and clipped drum beat. Why Choose ends with the count-up number “12345”, with Rachel intermittently shouting “1…2…3…”, etc…, like she’s about to give the boot to someone who has tested her patience for far too long. The guitar winds around in a faster, more fluid line, but still at a wiry, higher pitch against a rumbling bass line, kinetic drum beat, and jangling percussion. It would have been nice to hear more of this style and instrumental tone, and/or more of the complexity of “Passing Through”, on other songs off Why Choose.