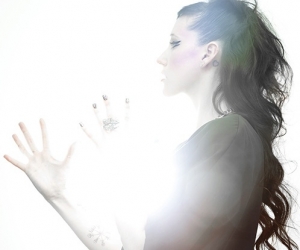 White Prism. Since birth, music surrounded the Australian-born, NYC-based artist.  It was her Hungarian grandfather, a jazz pianist, who gave her his blessing by declaring, “this one will be musical.” And so, her musical journey began.

Upon graduating from high school, Johanna enrolled in a vocal jazz program at the Australian Institute of Music, where she graduated with honors. After a stint of performing across Australia, Johanna landed in New York City. Once in New York, she found herself as a studio engineer at the prestigious Nola Recording Studios. It was during her time at Nola that she began writing and recording over 300 demos. These demos would eventually lead her to her first album and the shimmering sounds she would go on to create.

Johanna had navigated her way through every aspect of the music industry, and she had finally revealed herself as an artist worthy of acclaim. She would soon find herself crisscrossing the globe, including a world tour with The Cranberries, as well as performing at Autre Magazine’s (James Franco and Adarsha Benjamin’s publication) Paris launch. However, she was constantly shifting and shaping her sound along the way. Her ethereal, “Kate Bush-inspired huskyisms”, as described by Time Out magazine, crystallized into the electro-pop culimination that is White Prism.