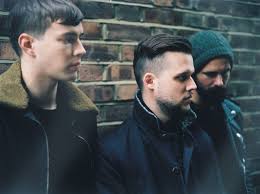 White Lies continue their electro-fuelled dance with the heartfelt “Hold Back Your Love,” with the new video directed by David Pablos. This soul searching track is filled with an arpeggiated bassline, dancing beats, landscape dream-like synths and a big crowd pleasing chorus where lead singer Harry McVeigh lays bare his true emotions as he sings “Hold back your love, you know that I’ve had my doubts.”

Says White Lies’ Charles Cave on ‘Hold Back Your Love’; “It’s hard for me to talk about ‘Hold Back Your Love’ in a measured way. We all absolutely love this song. I felt the same after we recorded ‘Death’, ‘Bigger Than Us’, or ‘Big TV’. Call it emotional attachment, or hopefully just a ‘good ear’, this song feels like it confidently sits itself down on the front row of White Lies songs that fall into elusive ‘encore’ territory. I’m struggling to remember how this song came about, which is always a positive feeling as it suggests the process was a totally pleasurable and inspirational one, but I know that it was written quickly and the melodies seemed to do that dreamy thing of writing themselves. I think we were in a ‘Tango In The Night’ state of pop when this song came about, and you can definitely hear that in the middle section. But equally, (and this band has been a huge influence since we were fifteen) there’s a solid Talking Heads stomp that, dare I say it, you can almost dance to!”