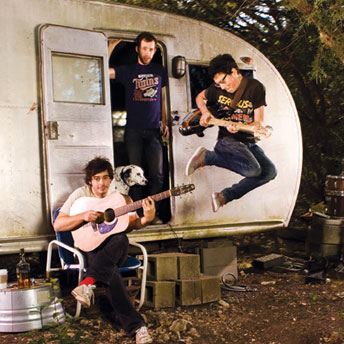 Taken from their upcoming album, Corsicana Lemonade now due out in the UK on 28 October via Downtown (it was due out 4 November), White Denim reveal a brand new cut in the form of ‘At Night in Dreams’, which sees James Petralli vocals, at their full throated soulful best, woven around some superb fret work and no messing lockdown drumming from our favourite Josh Block.

White Denim tour the US with Tame Impala & Flaming Lips this October before hitting the UK for a full tour in November. They now play two nights at London’s Village Underground. Full UK dates below.

Petralli concedes that the band’s aim was to pull back from the complex and considered song structures that took their cues from prog and jazz, and instead make a record that was closer to the White Denim live experience. In other words, tap into the quartet’s holy-rolling momentum and exhilarating, in-the-moment energy. “Initially, we did start by recording a bunch of rockist numbers, but we got kind of fatigued with it. I think we felt that we wanted to say something else, and our ears got tired of hearing really aggressive music and trying to work it into something.

With that in mind, Petralli, Austin Jenkins (guitar), Steve Terebecki (bass) and Joshua Block (drums) took up a longstanding invitation. In January of 2012 they’d toured with Wilco and afterward, Jeff Tweedy joked – or so they thought – that someday they should record together at the band’s Loft Studio. Petralli remembers thinking it was a courtesy comment, but then this year Tweedy called to say that he had a five-day window, and wanted White Denim to go in and cut some tracks. So in late March of 2013, Petralli wrote a couple of songs at short notice and they headed to Chicago, which is where the all-important loosening up process began.

Only two album tracks came out of that session – ‘Distant Relative Salute’ and ‘A Place to Start’ – but the experience of playing live in the studio as an ensemble was crucial. Explains Petralli: “We spent a day apiece on those two songs and then the last three days, we just tried out every instrument we could get our hands on and laid out these kind of krautrock vamps. That studio is basically a museum; they have pretty much any instrument you could think of, so we just threw everything at it. Jeff was really adamant that we play live, so there was a lot of emphasis on the performances from the four of us being definitive. The spirit was to not have any studio fixing. When I listen to the new record now, it sounds like us learning to play that music, which is cool. To capture that freshness and that…uncertain certainty.”