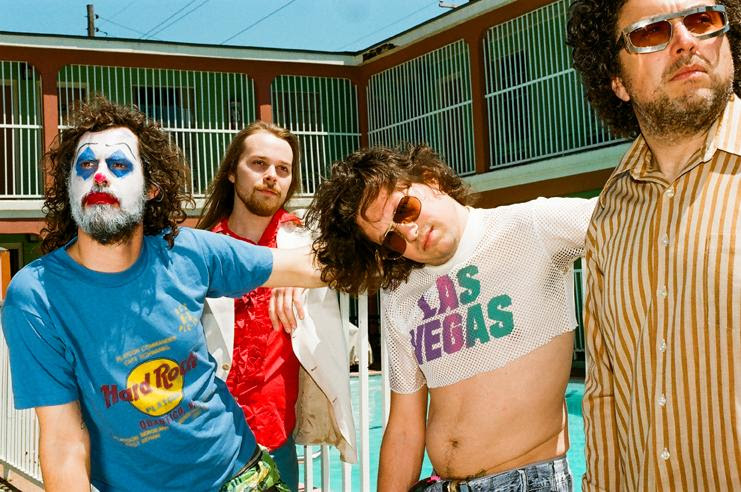 Austin, Texas’ band White Denim have signed with City Slang Records. The label will release the band’s new album Performance on August 24, 2018. In other news, White Denim have shared the album’s first single, “Magazin,” via a lyric video, and confirmed a headlining North American fall tour.
?
In his 1942 essay The Myth of Sisyphus, Camus wrote that “All great deeds and all great thoughts have a ridiculous beginning.” 15 years later Richard Wayne Penniman wrote “Wop bop a loo bop a wop bam boom,” an undeniably powerful vocalization that on any given Wednesday in any given situation, civilized or otherwise, is still fully capable of setting somebody’s stuff aflame. Over ten years and seven long players into their career, White Denim are still in the relentless pursuit of a thread- in other words, a wick.

If the album’s title seems meaningful in its deadpan simplicity, it is. There is, of course, the meaning of “performance” that applies to anyone for whom the live arena is the proving ground. There’s also something more personal but universally acknowledged – the gap that exists between what we project and who we really are. “There is something absurd and isolating in continuing this pursuit for personal connection on such a wide scale. When writing an album I essentially leave my actual life, retreat deeper into myself and as it nears completion, I evaluate my work based on my own extremely skewed notion of what is widely relatable and still legitimately cool,” says Petralli. “My idea of cool is most significantly shaped by Steve’s body language when we are talking through ideas in session.” It has been said that “A clown enriched knows neither relation nor friend.”

Performance was mainly recorded over eight weeks at the band’s new downtown Austin studio, Radio Milk. Once an old general store constructed in 1902, it is now respectfully restored and sandwiched in between bars and modern condominiums. Two new players were key in what Petralli describes as “a super-collaborative record:” adding new members, keyboardist Michael Hunter, and drummer Conrad Choucroun.