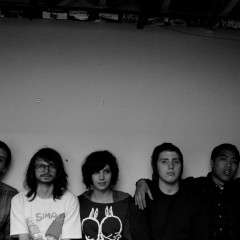 On July 9 Graveface Records will release Whirr’s new mini LP Around. In anticipation of the release. Today the band premieredalso premiered “Swoon” You can listen above. Whirr just announced a U.S. tour in support of the release, including shows with wild Nothing. All dates are listed below. More shows will be announced shortly.

With two albums to date, Bay Area six-piece Whirr has developed a reputation for dirgeful shoegaze, buttressed with textured layers or guitar and weighty, driving compositions. Spacious and moody, their 2012 LP Pipe Dream drew comparisons to heavyweights of the genre.

Now, Whirr returns with Around, which finds the group restrained, but no less dark. Here, they explore longer songs, with their shortest clocking in at just under six minutes. Catchy melodies, traditionally a part of the band’s wheelhouse, give way here to a droning ambience, shifting Whirr slightly from their shoegaze core toward a dour post-rock sound. Vocalists Kristina Esfandiari and Loren Rivera keep their contributions misty and abstract, serving here as additional instruments more than messengers. But the thunderous drums and lavish guitar work remain – albeit in a colder, glassier form – making Around both a departure and a logical step forward from Whirr’s previous work.