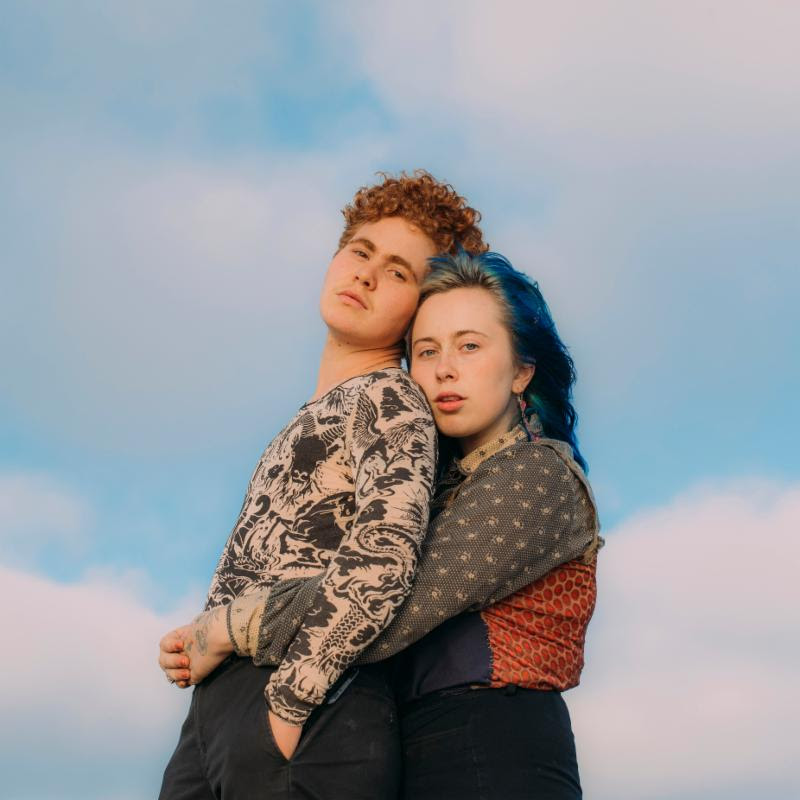 What Chaos Is Imaginary

“An unfamiliar place where you’d rather stay…” The first lines on album opener “Lucy’s”, delivered by an unfamiliarly deep voice, promises that while this isn’t entirely the Girlpool fans are used to, there is potential for something better. Back in 2014, Cleo Tucker (guitar, vocals) and Harmony Tividad (bass, vocals) released their self-titled EP on Bandcamp—a proudly angry, bleeding heart, grrrl punk album powered by synchronized shouts. With the release of their studio albums Before the World Was Big (2015) and Powerplant (2017), Girlpool showed significant artistic and stylistic growth, allowing drums, intermingled guitar work, and increasing separation between the two singers’ vocal ranges, all while exploring their identities within the lyrics. For What Chaos Is Imaginary, out February 1st under record label Anti-, Tucker and Tividad wrote their pieces off on their own—a first for the duo. Tucker’s recent transition to male has brought about both a huge shift in Girlpool’s harmony, not just in the clearly new vocals on half the album, but also in the creative schism that permeates the record.

Gone too are the artistic means restricting Girlpool to lo-fi punk. As a cohesive record, the genre is nebulous. Guitars can be light and airy on tracks written by each of the duo, like the soft indie rock in “Hire” and “Joseph’s Dad”, but guitar tracks often pile up and become heavy, not sonically but emotionally, in consistently reappearing shoegaze influences (“Stale Device”, “Where You Sink”). “Hoax and the Shrine” is folksy, “Swamp and Bay” has the warmth of indie folk rock, and electronica beats often underlay Tucker’s more heady tracks, like “Chemical Freeze” and “Minute In Your Mind”. What immediately strikes those familiar with their old work is the ambition of What Chaos Is Imaginary. I found many of Tucker’s tracks to be grasping for something more profound both in theme and sound, both reminiscent of Billy Corgan’s early Smashing Pumpkins records. Tucker doesn’t go all-in this way on every track; “Swamp and Bay” and “Hire” are notable examples that still stray from Girlpool’s repertoire, while showing off more melodically complex guitar playing. The deeper voice still doesn’t feel settled into for Tucker, leading to more asymmetrical, contextually vague lyrics on confusion, purgatory, and restlessness. It’s a very personal transition on display, ripe with creativity pulling in all sorts of directions, though it can leave some ideas feeling thinned out.

Harmony Tividad’s tracks also show growth and a desire for seriousness—the titular “What Chaos Is Imaginary” comes to mind with its moody synth tones and string outro. Still, many of her tracks are rooted in the band’s more familiar (and more simple) structures. Her songwriting, while diverse from song to song, feels more symmetrical in composure, such as the repeated chords and rhyming couplet lyrics on “Pretty”. Solid, but often safe. To her credit, she has a skill for memorable phrases in her lyrics, equally coy and clever: “Dressed up all depressed in my Sunday best” (“Lucky Joke”), and other lines about nostalgic let-downs, vain personas, and perpetual sadness.

What Chaos Is Imaginary is the boldest statement yet for two young artists with clearly upward trajectories, though they’re clearly in different directions. The album doesn’t always know what it wants to be, but it reflects this unique moment of liminality they find themselves in in honestly and consistently interesting ways, both in its lyrics and sonics. Standout tracks for me are “Hire”, “Stale Device”, and “Lucky Joke”.