“Welcome to Adamstown” By Flogging Molly 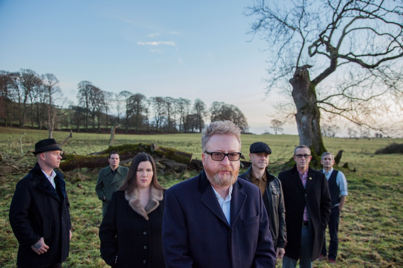 Seminal Celtic punk rock band, Flogging Molly, have teamed up with Brooklyn Vegan for the premiere of “Welcome To Adamstown”, the newest track off their highly anticipated upcoming album, Life is Good, out June 2nd on Vanguard Records.

“Welcome To Adamstown” follows the recent release of “Reptiles (We Woke Up)”, “The Hand of John L. Sullivan”, and “The Guns of Jericho.”

Produced by Grammy Award-winning Joe Chiccarelli (U2, White Stripes, Beck) and recorded in Ireland, Life Is Good is a strikingly powerful album filled with rousing songs that are timeless in their sentiment. “Welcome To Adamstown”, for example, tells the story of Adamstown, a community that had been planned for west of Dublin, but was forced to come to a halt after Dublin was hit with a recession, and now remains only partially completed. “It had a huge negative connotation to it,” says Flogging Molly vocalist and songwriter, Dave King. “But now it’s starting to turn again, people are starting to move there, businesses are starting to open, and there is hope.” King further describes the song as “West Dublin meets East LA.”

Fans can catch the band playing an electrifying mix of new songs and classic hits on Flogging Molly’s international headlining tour, which kicked off last night in Oakland, CA, and hits Portland, OR tonight (see itinerary below). Ticket orders in select markets will include a digital download of the new album (upon release). For additional ticket information, visit www.floggingmolly.com.

Founded in Los Angeles, Flogging Molly has long been hailed for their compelling lyrics of exile, rebellion, history and struggle told through exuberant anthems with a fierce blend of raucous punk/rock and traditional Irish music. Life Is Good is the band’s first studio album in six years, following 2011’s highly acclaimed Speed of Darkness, which reached #9 on Billboard’s Top 200.

Catch the band live on tour, and see complete itinerary below.

The White Buffalo to support to support U.S. dates May 4-June 3 EXCEPT May 14 and May 16