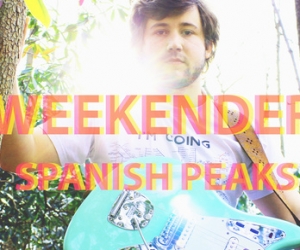 Philadelphia quartet, Weekender, have announced their debut EP, Spanish Peaks, will receive a proper release November 12 on PaperCup Music. Spanish Peaks was originally self-released by the band via Bandcamp this spring. Listen to the self-tittled album track above.

A fresh start for brothers Derek and Nic Sheehan means Tom Anthony, Emily Cahill, and Weekender. Born of patient minds, the Sheehan brothers played in a number of bands over the course of a few years, some lasting longer then others, some garnering more attention. Over that time their endeavors won the hearts of many, including producer Kyle “Slick” Johnson (Modest Mouse/Wavves), who signed on to work with the band on new material. Due to tight budgets and time constraints the recording amounted to a few weekend sessions over the next year and a half resulting in a debut EP, Spanish Peaks.

03. LSD and the Age of Interest

04. A Secret For You And Me (Trip Inside This House)