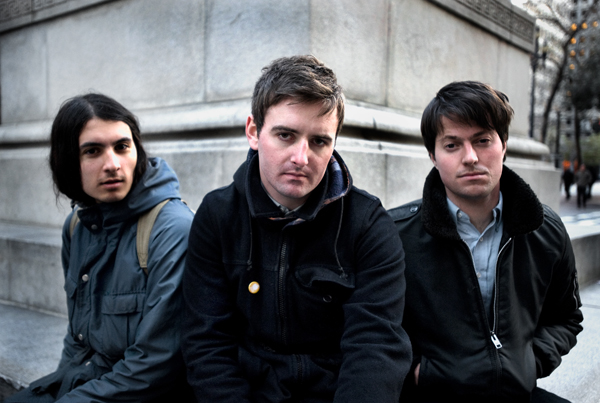 Northern Transmissions had a candid conversation with Kevin Johnson from the weekend. Their album Jinx comes out on Tuesday via Slumberland Records.

NT: Your last album Sports had a post-rock/C86 vibe to it. Overall, mostly inspired by 80s UK bands. What can we expect from Jinx?

KJ: Many of the same bands are still influencing us conceptually and musically. We really drew on most of the sounds that we grew up with, everything from Hardcore Emo, Post-Punk, and Shoegaze. We all have different influences. The recording process was really tough at times. You literally start out with a blank canvas, and sometimes you really have to push yourself forward to create. It can really be taxing. In the end, I think we’re all super happy with the album.

NT: You worked again with Monty Vallier. Is he someone the band feels totally comfortable working with?

KJ: Monty is such a talented musician and producer. He liked our music and took an interest in us from early on. He really did take us under his wing. He taught us so many things in the studio. We could barely afford to pay him at times, but he always managed a way to get us into his studio. It was really a big favour he did for us. Looking back, it was also a scary time. We were all kind of broke from not being on tour. He always managed to get us in, even in between bands. We’re definitely lucky to have met and worked with him.

NT: The band recently moved from the Bay Area to New York City. How does it feel moving to the other end of the country? Does it inspire you living in New York?

KJ: New York is really inspiring to me. We did move there, after we finished Jinx. I think we all needed a big change. The timing was good too. My brother and our manager both live here as well. There is always something exciting happening here. If you stay home, you really don’t worry about it because something just as exciting and inspiring will happen tomorrow. I actually feel more grounded in New York.

NT: Weekend really seems to keep a fairly low profile. The band doesn’t make many videos or have a regular website. Is this a conscious decision to avoid overexposure?

KJ: I think we have always been conscious of over-saturation. There are bands that constantly tweet or instagram stuff. I think that all this constant exposure can take away from the art. I have bands that I really admire quite a bit, but after seeing tweets and pictures on Instagram, it get’s really tiring and boring. It’s kind of strange that people want to share so much of their personal life online. We know that we have to do certain things to get our music out there. We recently have been working on some video projects that we are really excited about.

NT: The new album is titled Jinx, which taken from Shaun’s father’s stage name, can you tell me a bit more about this?

KJ: It was Shaun’s dad’s stage name. It is also kind of a mysterious term. We all thought that it sounded kind of cool for an album title. It’s like believing in something, if you believe in something strong enough, you can really make it happen. We also leave it open to your interpretation.

NT: Thom Yorke recently came out with some major criticisms regarding Spotify. You guys have talked a bit in the past about bands having a hard time making a living in the music industry. What’s your opinion these days on how things are going?

KJ: I think if you are in a band, you have to write off the idea that you are going to make money. You can rant against Spotify or Napster, but that’s how the world is working. People find music that way. On the other hand, people will be able to hear your music. Twenty years ago, it would be almost impossible for someone to find your music in different parts of the world. The main issue is how to make a living. Bands have to tour much more and sell vinyl. Putting your song in an ad, film, or TV is now acceptable. If you can get a placement, it can be a decent way to generate funds. I don’t personally think it’s the worst thing in the world, although I am still not a big fan of the idea. We really have struggled at times, but we want to keep on making music full time and touring as well.

NT: Which five records have continued to influence the band?

Fugazi – In On The Kill Taker