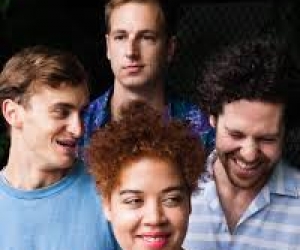 Take A Dip” reveals another side to the band, showcasing their more hypnotic, rhythmic tendencies. If “Motorcycle” was a bouncy, noisy joyride, “Take a Dip” is a tense, dry-heave. The band sounds as if they’re constantly being wound-up– the slow groovy grind of the tune more punishing with every repeat. Jasmyn Burke’s vocals skitter and stop in line with the drums, adding to the taut feeling of the song.

Jasmyn Burke and Morgan Waters met by chance, quickly taking advantage of their immediate chemistry to collaborate by recording demos based on the former’s iPhone voice memos. The tracks were reworked and the pair did not shy away from hooks, noise or bombast. An experiment of sound that transformed into their own unique brand of soul sludge, held together by Jasmyn’s distinctive voice and melodies.

Weaves are currently harnessing that energy in-studio and will be playing a run of shows in support of “Take A Dip.” With a live band that features Spencer Cole on drums and Zach Bines on bass, Weaves is slick, yet slimy, backwards and yet forward thinking, perhaps on the tip of collapsing.