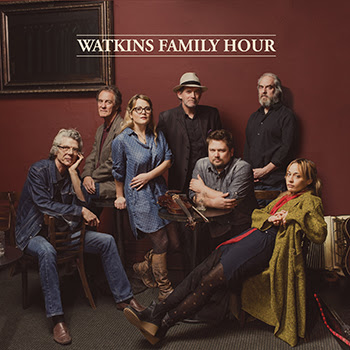 Watkins Family Hour’s rendition of “Brokedown Palace,” is now available for streaming. The song is from the band’s debut, self-titled album, which will be released July 24 on Family Hour Records via Thirty Tigers. The collective features siblings Sara and Sean Watkins along with Fiona Apple, Benmont Tench, Don Heffington, Greg Leisz and Sebastian Steinberg.

To celebrate the release, Watkins Family Hour will soon hit cities across the U.S. kicking off with a performance at the Newport Folk Festival on July 24 and including an official Los Angeles release show at the Largo on August 13. The tour also includes dates in New York City, Nashville, TN, Chicago, IL, Berkley, CA, Seattle, WA, Alexandria, VA, and Asheville, NC.

Watkins Family Hour, recorded live over three days in the studio of their friend and producer-engineer Sheldon Gomberg. An all-covers affair, the album additionally includes Sara leading vocals on the Grateful Dead’s “Brokedown Palace” and Apple singing “Where I Ought To Be,” originally performed by Skeeter Davis.

Of the album and tour, Sara comments, “Taking the Watkins Family Hour on tour and releasing this record feels like the right next step. The show is about a community of players and that community stretches across the country. If we can’t get everyone to L.A. to do our show, we’ll come to them. We are coming to towns where we have friends and we can have those moments, even if it’s not our home club. It’s the people on stage who make that happen; it’s just a matter of getting the right group of people together. We are being thoughtful about where we are going so we can have that sort of flexibility. It will be a very different show in every town.”