Watch The Thermals’ Video for “The Sunset” 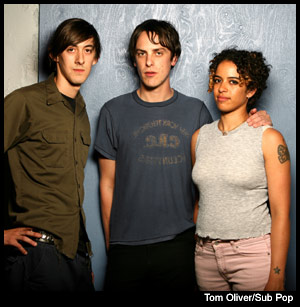 The Thermals have premiered their new video for “The Sunset” from the band’s new album Desperate Ground out now on Saddle Creek. The video is a bright, colorful and uplifting three minutes of film.  The video stars Thermals bassist Kathy Foster as “The Boxer”, in an obvious ode to classic boxing films such as “Rocky” and “Raging Bull”.  Much of the video is an homage to the opening credits of Spike Lee’s “Do The Right Thing”, with Foster channeling Rosie Perez.  “The Sunset” features many classic Portland, OR locales (like many Thermals videos) and was co-directed by Portland filmmaker Jeffrey Rowles and The Thermals themselves.

The Thermals’ sixth LP and debut for Saddle Creek was produced by John Agnello (Dinosaur Jr, Sonic Youth) in Hoboken, NJ. Agnello and The Thermals completed the record and evacuated the studio just hours before Hurricane Sandy ravaged New Jersey, a fate quite fitting when you consider the product. Desperate Ground is a true scrappy and scratchy return-to-form for The Thermals.

Lyrically, Desperate Ground is a brash and irresponsible ode to human violence, a black celebration of the inevitability of war and death. A dark and yet joyous affair, Desperate Ground tells the (murky) tale of a lone rogue in the night. One man, one path, one sword. An unceasing urge to destroy. A never-ending battle against the forces of nature. A destiny impossible to avoid.