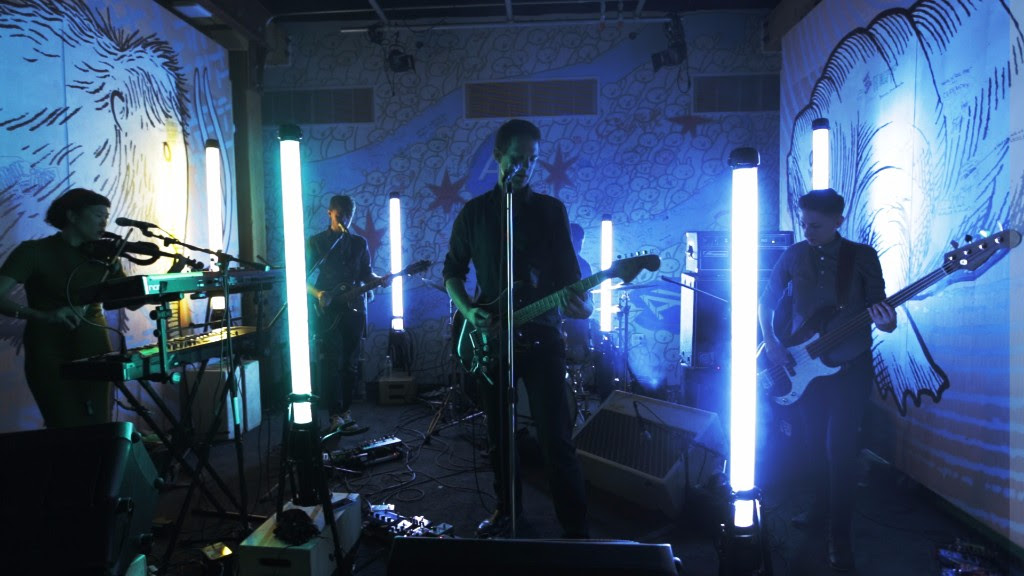 Shearwater recently stopped by The Onion’s A.V. Club offices to film an “Undercover” session while on tour supporting Jet Plane and Oxbow, their acclaimed 2016 release out now on Sub Pop.

In addition to their planned cover (which will air later this season), they surprised The A.V Club with a complete, spot-on performance of David Bowie’s 1979 album Lodger, which includes songs Bowie himself never attempted live.

The A.V. Club says of the performance, “”Undercover” veterans Shearwater came by the studio earlier this year to tackle a song from the main list—business as usual, right? But a couple of days before they showed up, Jonathan Meiburg asked if we might want to film his band covering the entirety of David Bowie’s Lodger, too. Why would we say no to that? So as a special pre-season bonus for “Undercover 2016,” here’s Shearwater covering Lodger from start to finish, along with an essay by Meiburg explaining his relationship to the classic record.

Shearwater’s Jet Plane and Oxbow is available now on CD/ 2xLP/ DL through Sub Pop Mega Mart, iTunes, Amazon, Google Play, Bandcamp, and at an independent retailer near you.

MAYBE IT’S JUST A TRICK OF THE MIND

What is it about Lodger? Everything about it seems wrong at first. It was billed as the final volume of Bowie’s “Berlin Trilogy”, but it sure doesn’t sound conclusive; for that matter, it wasn’t recorded in Berlin. Bowie didn’t even follow its release with a tour—just an indelibly weird Saturday Night Live performance and a series of videos in which he destroyed pointedly flimsy sets.

As a collection of songs, it seems eclectic to the point of being slapdash. “Yassassin” was an attempt to invent Turkish reggae; “Move On” is “All the Young Dudes” played backwards, and the singles “DJ”, “Look Back in Anger”, and “Boys Keep Swinging” form an ungainly lump in the middle of the record, like a cow that’s been swallowed by a python. None of the songs really end; they all fade out on one uneasy groove or another, and sonically it’s nowhere near the majesty of “Heroes” or Low. Sonically it sounds claustrophobic and disoriented, and lead guitarist Adrian Belew’s pyrotechnics are shoved down until they’re tinny and contorted, the opposite of Robert Fripp’s explosive work on “Heroes”.

So it’s a little hard to say why this record, more than either of its predecessors, always cheers me up. Maybe it’s Bowie’s gift for making you feel that his mania, his confusion, had something to do with your own; no matter how isolated and estranged from the world you feel, he could reassure you that you weren’t alone. I rediscovered Lodger last year after some wild traveling; in the span of a couple of months I’d been face-to-face with the world’s largest spiders in Guyana and a jaguar in Brazil, certain I was going to die in traffic in Hyderabad, and quaking in terror on a jetliner circling the Persian Gulf as it dumped fuel for an emergency landing. When I finally got home, I wanted to hide in a corner with a blanket over my head and never leave the house again.

Listening to Lodger over and over helped the world seem less frightening, or at least made my own anxiety more digestible. So many of the lines resonated: Red sail action/wake up in the wrong town/boy, I really get around! sums up a dislocated thrill well known to anyone who’s been on a tour, while the high-speed slideshow of “African Night Flight” nails the feeling of a trip gone sour: Sick of you!/sick of me!/lust for the free life/quashed and maimed/like a valuable loved one/left unnamed!

And touring was on my mind. Our new record was coming out, and I wanted to do something special in the live show. I was listening to Lodger for the third time in a row one Saturday morning, dancing and singing along, and thought: What if we just played this? It almost seemed like Bowie had thrown down a gauntlet by naming Lodger as one of his favorite albums while rarely (or never) playing its songs, even though the songs seemed fairly…well, playable, with a little work. (“Heroes” would be a different story). We were taking the album apart in tour rehearsals when I got a text from a friend in the middle of the night that read: “Bowie.”

Hours later, the news was everywhere. It was a weird feeling; our little stunt suddenly felt much heavier, and I wondered for a minute if we should put it aside. I had secretly hoped that if we did a really good job, Bowie might hear about it one way or another; maybe I could invite him to our New York show! Now all that vanished in a sobering instant. Now it was just music.

But what music.Lodger turned out to be trickier (and more fun) to play than I’d imagined, and as we peeled back the songs’ sonic layers, they revealed clever and coherent structures under the surface of their desperation and bewilderment. I did my best to serve up ersatz versions of Adrian Belew and Carlos Alomar’s guitar lines (difficult), and to sing without just aping Bowie (nearly impossible), and we invented endings to replace the fade-outs. When we finally started playing the songs live, a few at a time, we were all surprised how alive they felt, how fresh they would sound if they came out today.

At a sold-out night inChicago we figured what the hell and did the whole thing as a 45-minute encore—and the audience went nuts. It had a cumulative effect I hadn’t expected. We were still buzzing when we rolled in to the A.V. Club the next day for “Undercover,” and I asked if we could play Lodger for them, too. (Thanks for going for it, A.V. Club). We even pulled the colored gels out of the fluorescent lights we used in our shows to give the session more of an Isolar II-style atmosphere.

There are plenty of funny moments, of course, since it’s alive one-take; I spaced on my favorite lyric in “Red Money” (Reet-petite and how-de-do!), and you’ll see my mic stand break on “DJ” and then collapse during “Look Back In Anger”. Normally I’d have stopped the song, but that one’s a real basher for the bass and drums, and I didn’t want to put Sadie and Josh through it twice—so I dove to the floor and just kept going. Listening back, I think it turned out pretty well, though I bet it looks ridiculous. But I also can’t think of a better metaphor for Lodger itself. In the weirdest and best way, it’s inspirational music.