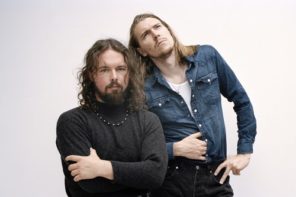 Alex Cameron has extended his live schedule in support of Forced Witness. Along with the news, he has released a new video for “Studmuffin96,” directed by Jemima Kirke, who also stars in the video alongside Cameron.

In line with the standout videos Alex Cameron has previously released, “Studmuffin96” is a dark, comic observation of one girl’s instant obsession with an older man which, by sheer chance, culminates in a seedy night in a motel room many years later. As Kirke describes it, “it’s a coming of age story about the bleakness of a fantasy realized. A young woman is reunited with a man from her past, and an attempt at romance ensues. But regardless of their efforts, their only common ground is a laundromat and a motel room.”

The Alex Cameron six-piece band featuring Roy Molloy on saxophone, Justin “Juice” Nijssen on bass, Jack Ladder on guitar, Holiday Sidewinder on keys and vocals, and Henri Lindström on drums is currently on the road in Europe before heading to Australia for another extensive run of arena shows supporting The Killers throughout April and May.