Watch A New Visualizer From Algiers 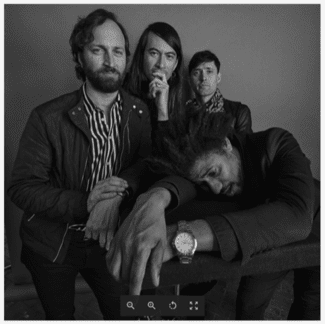 Matador recording artists, Algiers, have debuted “We Can’t Be Found,” and its accompanying video from forthcoming release There Is No Year. The album, comes out out on January 17th. Algiers kick off a European tour, starting February 3rd in Brighton, England. returning stateside in March.

There Is No Year. was recorded over the past year by childhood friends and Atlanta natives Franklin James Fisher, Ryan Mahan and Lee Tesche, as well as drummer Matt Tong, in New York alongside producers Randall Dunn [Sunn O))), Earth] and Ben Greenberg [Zs, Uniform (as featured on Twin Peaks season 3)]. There Is No Year is titled for author Blake Butler’s novel of the same name, a major inspiration to the band over the course of the album’s making.

The video was directed by Ian Cone. “I always feel the most successful music videos are the ones that are reflective and convey the mood of the song to the listener over everything else,” says guitarist Lee Tesche. “In this instance, we collaborated with the artist Lloyd Benjamin, trying to frame some of his sculpture work in a more abstracted way, referencing the urban dystopian cityscapes found in the German expressionist films of the 1930s. The result aspires to be somewhere in between the unsettling work of Darius Khondji and the set design of The Cabinet of Dr. Caligari or Fritz Lang’s Metropolis.”

“Those aware of the ideals of this outspoken four-piece will find their latest direction on There Is No Year traversing unprecedented ground,” says Butler in his bio for the album. “Coming off two years of nonstop world-touring for their critically acclaimed second album, The Underside of Power—including Central and Eastern Europe, the Baltic States and the Balkans, where they have established a rabid following; an extended stint opening for Depeche Mode in huge stadiums such as the 75,000-capacity Olympiastadion in Berlin; as well as Glastonbury 2019—There is No Year solidifies and expands upon the doom-laden soul of their foundation, toward an even vaster, genre-reformatting sound, one somehow suspended in the amber of ‘a different era,’ as described by guitarist Lee Tesche.”

Formed in London in 2012 by Fisher, Mahan and Tesche, friends from Atlanta who had been playing music together since childhood, the band recruited drummer Matt Tong (ex-Bloc Party) and signed to Matador in 2014.

Algiers
There Is No Year
Matador Records