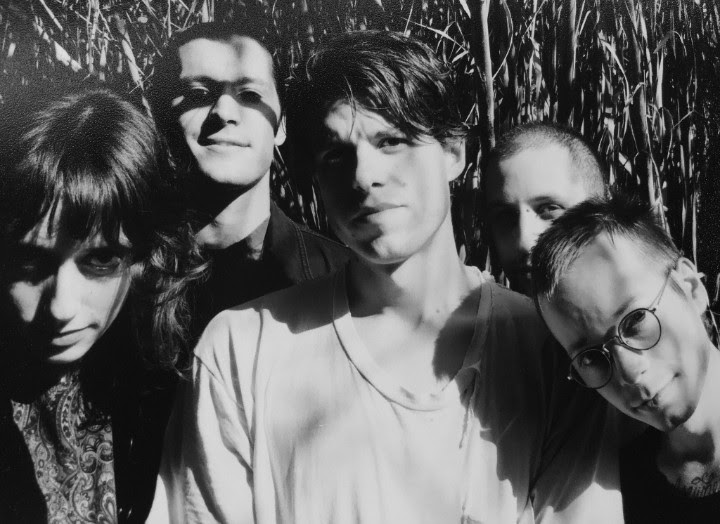 “Plum,” the lead single off Wand’s upcoming album of the same name, begins with steady piano chords and frontman Cory Hanson’s delicate croon. It builds slowly, subtly, and climaxes with a lush mixture of jangly guitar and dueling vocal harmonies. It’s not necessarily what one expects from Wand, a psychedelic rock band known for its hyperkinetic song structures, science fiction themes and monstrous guitar riffs. As one commenter on YouTube puts it, “I was waiting for a heavy drop,” but it never comes.

The way Hanson explains it, he and his bandmates simply can’t afford to stand still in the hyper-accelerated landscape of today’s music industry. “What you have to do is listen to yourself, stop listening to YouTube comments and caring about that shit,” he says. “Otherwise, you’re just going to disappear.”

Northern Transmission: Your new album is out Sept. 22. What can fans expect?

Cory Hanson: When we sequenced Plum, we felt like including only the essential components. It’s about the way they all interact as a circuit when you listen to the record. It was really hard to pick which songs to release as singles because they are moments we really don’t want to give away. We really want people to find them on their own. You have to listen to the whole record to get a sense for it—or see it played live. That completes and cements the record-listening and understanding, as far as intention goes.

NT: Can we anticipate heavy moments on Plum?

CH: There are tons. I think it’s our heaviest record, but I use the term loosely. When we were working on this record, we were looking for strong, resonant feelings. We wanted to see how heavy we can make them. It’s a weird record because it’s our harshest record; our softest record; our happiest record; but it’s also our saddest. It’s all about harsh differences and blending things and seeing how they interact together. So, I’m interested to see what people think about it as a whole, because the singles are really unfulfilling.

NT: What sort of band is Wand? Do you consider yourselves metal?

CH: We’re not a metal band. That’s for sure. We’re a … shit, I don’t know. It depends on the day. I don’t even see our identity shift that much, but people seemed to get really upset when we don’t do things the way they want. I don’t really understand that. The heavy records are still there—you can still listen to them. In terms of genre, I feel like we most align ourselves with bands that are pop in terms of structure but experimental in spirit and in the way they navigate pop. We’re a rock band for sure, and I don’t have a problem saying that.

NT: Is it wrong for a band to move on from what they’ve done?

CH: It’s not wrong, we’re just artists and human beings. It’s like, if your friend used to work at Best Buy, but now he works at Bed, Bath & Beyond, and you’re mad because he left Best Buy. I don’t understand why it’s a big deal. Or, it’s like asking a filmmaker why they made a period-piece drama, even though they’re historically known to do sci-fi thrillers, or whatever. The point isn’t the vessel we’re inhabiting for a moment as a band, whether that be rock or metal or psychedelic. None of those things are interesting as genres. I appreciate artists who play with genre tropes and create their own form out of it. If you can’t trust us beyond being a heavy rock band, what are you looking for with music? Are you looking to be surprised, or just looking to pass the time and affirm some false notion of identity that isn’t who you actually are? For us, that’s genre music—it sucks.

NT: Does being in a successful band not line up with your expectations of ‘making it’?

CH: It does and doesn’t, and what when it does—when it lines up with the vision in your head—it’s really weird. I remember when I was a kid, I watched a video of Pavement playing Lollapalooza or something and there was just this sea of people. I thought, ‘That looks like so much fun! That looks like the best thing ever.’ Somehow, we’ve ended up playing many festivals where we play for that many people, and it’s so weird. It is exactly like that, but it’s also just a fantasy—it’s still unimaginable, even when it’s happening.

NT: As a frontman, you sing and stay very busy on the guitar simultaneously. Was that style difficult to nail down?

CH: Yeah, there are so many times when we’re playing where I just stop and say, ‘I can’t do this.’ I have to let it go for a minute, because I’ve very obsessive, especially when I can’t do something. I’ve very competitive with myself. I’ll practice and practice until I can play it and sing at the same time–and sing confidently. The guitar stuff, at this point, I think just kind of flows out of me, and I don’t mean that in a pretentious way. It’s gotten to the point where I have to stop doing ridiculous shit all the time, because it just doesn’t sound that good when you’re noodling the whole time. I have to rein it in.

NT: Are you less comfortable as a vocalist?

CH: Yeah. The biggest challenge for me, in terms of playing live, has been singing. For a long time I really, really distrusted my voice and didn’t feel comfortable as a singer on stage. I think that now, for the first time, I just don’t give a shit anymore. I love to sing now more than ever. I’ve tried to rely less on the guitar bullshit and rely more on singing well and letting that sort of spiritual feeling of performance come through both channels.