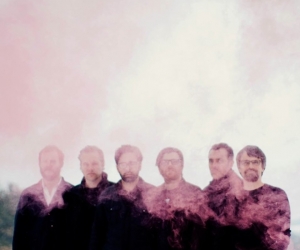 For Volcano Choir, Michinori’s films “capture the elements we often look for, but don’t know how to put into words. They’re evocative, symbolic, and interesting, without treading too far into concrete territory.

Each of his videos tell a story, but they are stories that need to filter through each individual to reveal their meaning. They involve rhythm and a strong sense of flow, mimicking music and narrative, yet existing outside both mediums. It’s like the magic spell version of our songs. How do you find someone to make such things? You don’t. It’s nearly impossible to hire such understanding. And because of that, we’re so glad we became friends with Michinori, a guy on the other side of the world, with different ideas and a different perspective, that somehow captures exactly what we want to say.”

Repave, the second album by Wisconsin band Volcano Choir, is out via Jagjaguwar on September 3rd in North America and on September 2nd in Europe. Repave is now available for pre-order! Limited-edition clear vinyl LP copies are available via SC Distribution and select retailers. All pre-orders from SC Distribution and iTunes receive an instant digital download of the song “Byegone.”