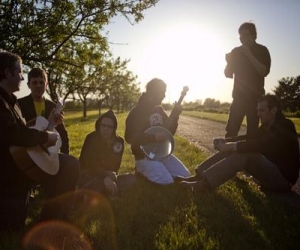 Volcano Choir’s “Byegone” is an anthem that rises and churns like the sea – an exemplification of what’s possible at the intersection of plush, thoughtful instrumentation and a signature vocal performance. The sound of their collaboration is in lockstep – writing together in real time, providing each other feedback face-to-face, and occupying live stages in front of fans.

Go to April Base to see Volcano Choir in the studio by watching the album trailer, and click here to read more about Repave‘s unique sound.

BYEGONE
day dead bye-gone
laying near the lights of the knights of the northern lodges
there’s a border road
no one slip slides or is stoppin’
and the neighborly, sleeping in a coffin
with enough keif
you could really bore someone
took a rat trap out to the Ache Inn
we were drinking all the ways to down
door ‘as wide open
you know what were saying ‘bout us now
he’s a legend
i’m a legend
and we both go tripping thru the door
well, YOU KNOW THAT WE ARE NORTHERN, NOW
i heard you promise me
at the north end of monogamy
cut there from filament lead
somewhere i heard you scream:
for others’ hearts
and in the limiest of lights
hold the keys to a Cuban flight that you won’t ever ride
it’s time to up and die
set sail!!!!!
set sail!!!!
set sail!!!!
set sail!!!!
hon, you plenty competent
so why aren’t you confident
it’s softening to be softening
then why are you so constant then?
are we going on a coat ride?
well, were off and definitely stumbling
tossin’ off your compliments, wow
sexing all your Parliaments