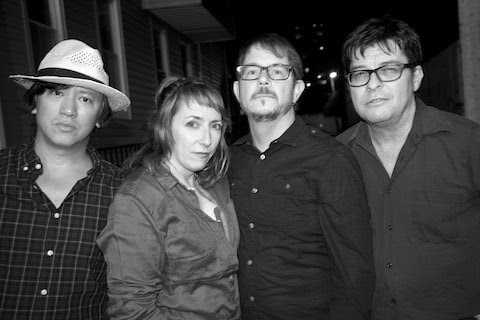 Vivid Low Sky, the quasi-solo endeavor of guitarist David Koslowski, just announced their new record, II will be out on March 11th, 2016 via Slimstyle Records. After fronting the Baltimore noise-rock band, Liquor Bike in the ‘90s, Koslowski spent time with indie-popsters Gerty and the Kraut-gaze of Free Electric State. II will be the bands first release since their debut album, Music for Movies Unmade was released over 15 years ago, on June 13th, 2000.

II was culminated from songs Koslowski has written over the years, the music became his therapy, while battling depression to the point of suicidal thoughts, almost losing his eyesight due to a detached retina, the death of his wife’s (Shirlé) parents and most recently his own father’s death. This is reflected in II with its sense of growth as both an individual and a musician. The songs are both expansive and freeing at the same time introspective. The post-punk of “Cold Hands, Warm Heart” evokes the struggle of his father’s battle with a terminal disease, while the Eno-esque “Home” provides a sense of reflection and the comfort of being back in Baltimore.

For the recording, the band met at David & Shirlé’s house in Hampden, a Baltimore neighborhood, for an exhausting six-hour rehearsal, entering the studio the next day. Recorded with producer J. Robbins at his Magpie Cage Studio, in just two days, the foursome created what would become the foundation for II. Koslowski even tossed the group a couple brand new ideas that were left to chance and improvisation. Afterwards, J and David mixed the record both adding some additional guitars. The result of II is a subtly seductive, beautifully chaotic and gorgeously cinematic LP.

Brooklyn Vegan permiered the albums first single, “The Black Forrest” and announced the band will be playing a couple of shows in NYC before heading upstate to Husdon’s River Roadhouse on November 13th.