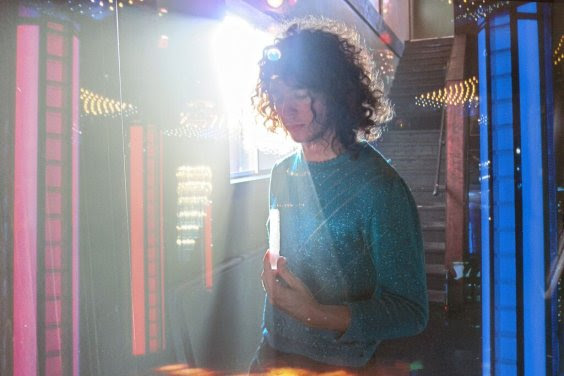 With the upcoming new album Into, Vinyl Williams leaves behind the murkier lo-fi production of his 2012 debut full-length, Lemniscate, for more textured, somnambulant pop. The new album, out July 24th on Chaz Bundick’s (Toro Y Moi, Les Sins) Company Records, moves him into a more vivid, multi-colored dream world than ever before. Unlike the dramatic film scores of his grandfather — Lionel is actually the grandson of famed composer and conductor John Williams — his songs are introspective, effortlessly blending ambient, electronic, Krautrock, psychedelia and shoegaze influences into a uniquely visceral listening experience that often mirrors the surrealism of his own collage-based visual artwork.

Vinyl Williams has premiered the latest single from his upcoming album called “Space Age Utopia,” a floating, dream-like pop number wrapped in ambient textures and soothing vocals. Listen to the new track via Soundcloud below.

Based in Los Angeles, Lionel Williams is an internationally exhibited visual artist and musician who’s been releasing music as Vinyl Williams since 2010. Williams reacts to his dissonant upbringing in Utah by creating dream worlds of religious & cultural harmony. It’s through his art – both musical, visual, and the music videos he’s directed for bands like Tears for Fears and Unknown Mortal Orchestra – that Williams projects himself well beyond the stasis of his youth, his metaphysical dream worlds in constant forward motion, with ancient mystical symbols, utopian architecture and exotic locales all enveloped in a rippling, VHS haze of psychedelia. These worlds are uniquely William’s own; everything released under the Vinyl Williams project is written, performed and produced solely by multi-instrumentalist Lionel. These varied influences were recently encapsulated in his self-directed video for “World Soul,” the album’s first single.

Vinyl Williams
Into
Out July 24th on Company Records