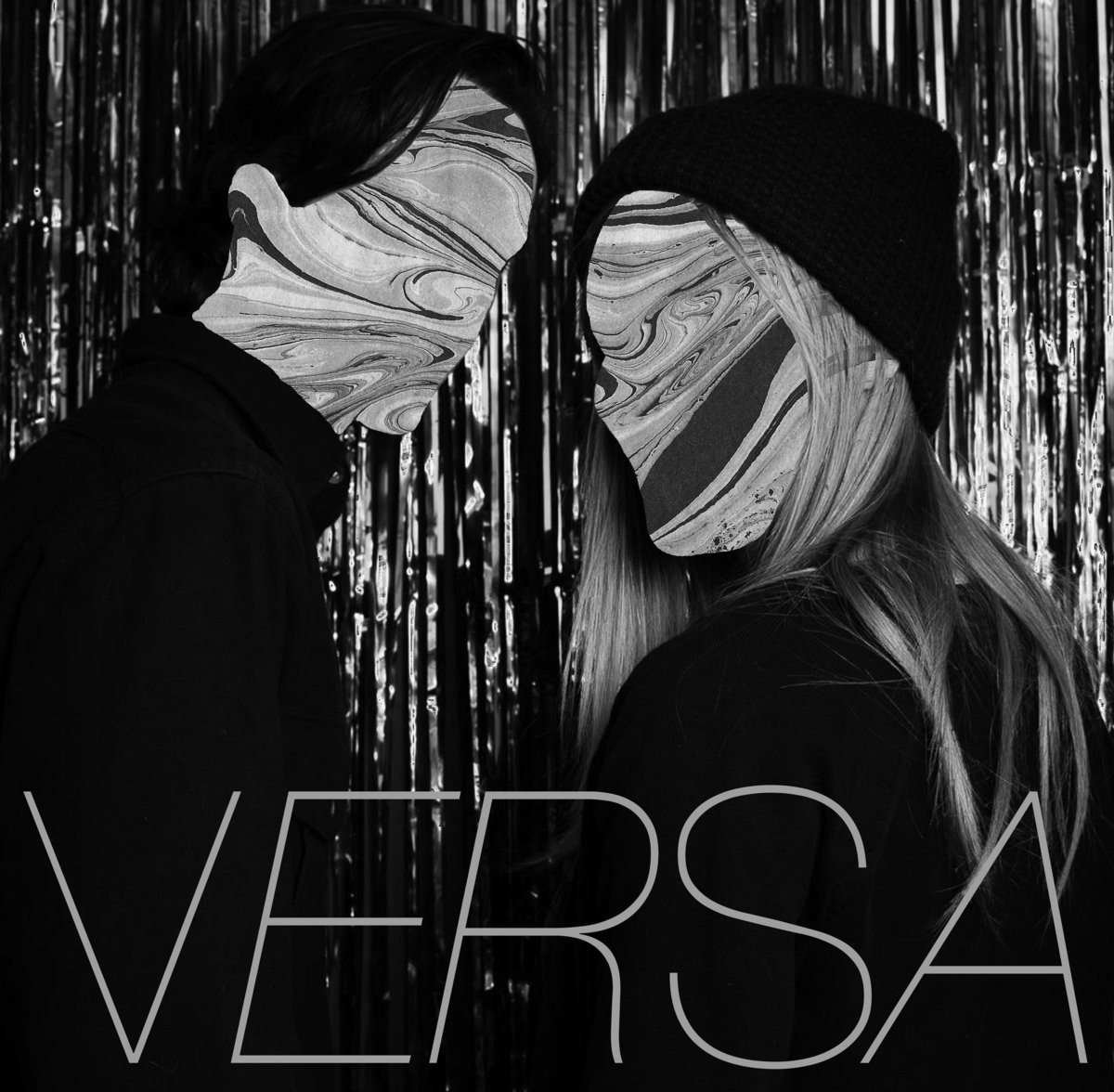 Beth Andralojc recently spoke with eclectic duo VERSA, shortly after the release of their most recent single “This is Where We Disappear” and its jaw dropping accompanying video. Beth spoke with duo Alex Hauck and Monika Ricci about videos, visuals and the state of performing, sharing and listening to music in a world gone digital.

Northern Transmissions: You recently said that ‘This is Where We Disappear’ follows a motif of the obstacles that an artist must overcome in order to create a lucid piece of music. Reflecting on this, do you feel that your newest piece elucidates just how challenging it is to create an original piece to listeners?

Alex: Part of the frustration involved in creating music is never fully elucidating what you’re trying to say. Hopefully, ‘This Is Where We Disappear’ represents that feeling as clearly as possible, rather than showing that you can just create a sensational piece in a moment. That being said, because our music is non-lyrical, it frees the listener to form their own interpretation of what it could mean by applying their own experiences, values and ideas to it. Obviously, as its creators, we have been attached to the song since before it was recorded and paired with a video; so, for us, it has taken on various new meanings over time. I may have been thinking about obstacles when I wrote the song, but, ironically, the resulting piece is smooth; it breaks steadily through obstruction with a gradually increasing tempo.

NT: We live in a golden age for sharing music, both in public – through live performances, and online, and a lot of people are cynical about just how uniquely different each band can be from the next. In light of this, is your latest track an attempt to separate yourselves from what many would consider an overabundant market of alternative music?

Monika: I think we’re fortunate to have such a variety of voices being represented in more and more accessible markets via streaming and online services. At a glance, our methods do not follow the traditional band approach, but this track isn’t trying to stand out any more than any of our other compositions; it highlights what we do, how we do it and who we are as creators.

A: In some ways, this is an attempt to be a part of the market of alternative music. We don’t usually think of ourselves as a band, more of a performance art project that fits both into the music and media art worlds. Releasing a song on Spotify and a music video on Youtube brings us into the strictly-music market, technically for the first time. And although there are a lot of bands out in these markets to compete with, an online presence generally fortifies your popularity and reputation as a musician.

NT: Following on from the previous question, what initially attracted you to merging an alt rocks style with electro sounds?

A: I have a background as a songwriter and playing in alt rock bands like Kashka, Pure Joy, Arms Reach, Gregory Pepper & His Problems. Around the time we formed VERSA, I was doing a lot of experimentation, specifically changing the sound of my bass guitar through pitch shifters, using a loop pedal to fill the whole frequency spectrum, and write full instrumental songs on one instrument. Fortunately, we found bandmates that were on board to expand on this format to create “live electronic” songs played on real instruments.

M: A grant was available through Kazoo Fest and Ed Video in Guelph to come up with a performance that merged music and visuals in an innovative way for a one-time performance at a music festival, and what resulted was this collaboration.

NT: ‘This Where We Disappear’ certainly creates a feeling of suspense and build up, rendering it dramatic, and fervently reflecting the theme of the track. Generally speaking, do you try to reflect the theme of all your pieces through the music, or do you convey it more subtly?

A: When composing both music and visuals, we try to create a conceptual framework for each piece, to help guide the creation. As artists writing without words, we still need to have some story or feeling to follow, and this is something we consider and discuss while writing. The themes and titles actually come at the end of the process, and many of our songs will have a working title, or just a number (this one is still referred to us as “2”) that gets changed before we release it.

NT: As well as music, visual art is also a huge part of your work. Does creating music videos and depicting your ideas visually enable you to express the different levels of artistry that exist in making music, aside from making sounds with instruments and machines?

A: Videos are the best way for us to pair our collaborative process for release. VERSA is founded on the idea of making sound visual, and vice-versa cymatics are the main method we use to visualize sound. Low frequencies from the bass are sent through subwoofer into a liquid basin, creating patterns on the surface of the liquid, which we capture and project. We believe that there is potential for a new performance format that exists at the intersection of the two mediums, which is what we explore through our collaborative process.

NT: In correlation with the previous question, do you believe that, rather than being separate, music and visual representations of our thoughts are inter relational? If so, is your video an attempt to demonstrate this?

M: Receiving and translating a multitude of audio and visual stimuli to generate a perception of reality that one navigates. Our video is one potential interpretation of this relationship, illustrating the specific visible connection that is shared between an audio frequency and its visible characteristics.

A: The senses are definitely interrelated, and it’s fun to create a feeling of synesthesia where you confuse what you’re seeing with what you’re hearing. The video for “This Is Where We Disappear” attempts to demonstrate one method we use to make sound visible, and showcase Monika’s marbled designs in a more hi-def way than with our live visuals. We also believe that more music projects should work to create a unique and interesting visual element to enhance their artistic expression and set themselves apart.

NT: Going back to Alex’s statement about always choosing to focus on a concept, do you usually find it easier to create music with a concept in mind, or do you find that the music arrives first, and that you work the theme around those initial sounds?

M: Our process is very cyclical, sometimes we start with a visual prompt, such as a particularly strong cymatic pattern, generated by a particular note. Alex will then use that note as the basis of a chord, which then relates to a scale and eventually a progression. Other times, Alex will be composing or improvising a series of loops and I will identify the notes or characteristics in the music that respond well visually, and we’ll use that phrase as the center of a composition. As we craft the sound and the direction of the composition, it’s helpful to consider and discuss a concept or theme to aid the process of storytelling in the song that would traditionally be fulfilled by lyrics.

NT: Speaking about your proclivity for fusing sight and sound, has your music been influenced by a particular artist, and has the artwork in your video been inspired by a specific musician?

M: Sonically speaking, we’ve been really inspired by Toronto post-rock Do Make Say Think. Their approach to music is something that we bonded over, years before this project ever came together. The artwork in our video is essentially a sampling of the large scale projections that we create during our performances – swirling marbled patterns animated by vibrating bass frequencies. The process of dropping ink into liquid has a rich history and it spans multiple centuries and countries. We’re doing it with a really modern twist; but my interest in it largely stems from the organic nature of shapes and endlessly unique patterns that get created throughout the performance. As an audience member, the musical compositions may be the same (although there are always improvisatory elements), the visuals can’t be replicated, even if I wanted to, so there’s some satisfaction in always providing and creating a one-of-a-kind experience.

NT: Moving onto the theme of touring, do you find it that crowds are excited to hear your new work, or are fans reluctant to hear new pieces, favouring your better known songs, instead?

A: We’ve performed quite a bit in Toronto, Guelph, and Montreal. Our audiences here have watched us grow from being a trio to a 5- or 6- piece and debut a whole bunch of material along the way. We often get some of the best responses to new pieces, especially as we become more comfortable composing in our “live electronic” format. We’ve toured Eastern Canada, and we’re headed out west soon, playing to new crowds each time we tour. We always try to perform our current releases when we’re touring, so look out for “This Is Where We Disappear” in our western Canada sets.

NT: How do you enjoy playing festivals, compared to clubs?

A: Playing at festivals is a great way to develop our fan base, typically like-minded music fans are coming together to the same place, it’s a great way to get a big crowd out to see you in a place you may never have played before. Some of the more intimate festivals that we’ve gotten to play allow for stronger relationships to be built because we can connect with audience members after our set. We’re really excited to play a couple festivals at the end of this summer; Electric Eclectics and Tumblestone in Ontario, and Shine On in Manitoba!

M: With our setup, people are always really curious about how the visuals are created and they are really happy when they get to have their questions answered, it’s a real show and tell with us and we can’t really do that at a big stage, people appreciate getting the behind the scenes aspect, which we’re more than happy (at this point) to do, part performance, part education. Big festivals are great though, don’t get me wrong, there’s nothing like the sound of an audience swelling with applause.

NT: Looking towards the future, is there a particular artist you’d like to collaborate with?

M: Something that we’ve been developing as a side project is doing live visuals for other performers – we keep our cymatic marbled visuals as our personal signature of course – but we love creating custom performance visuals for other artists. St. Vincent has been a major player for me personally, I’ve been really inspired by her tenacity in the music industry and her incredible musicianship. She usually has a strong visual component in her live performances in the way of stage props and costuming so it would be interesting to see that expanded to projection mapped podiums, for example (Annie Clarke are you out there?!). We’ve also been very intrigued by the idea of expanding our project across even more disciplines by incorporating dancers, theatrical elements, and more of a ‘happening’ than a traditional music performance.

NT: And lastly, when civilisation inevitably halts, the oncoming apocalypse ensues, and you’re forced to barricade yourself in your room with only one record to listen to for the rest of time, what would your choice be?

M: Environments Vol. 2, a sound scape album of birds chirping and bells ringing, soothing and tranquil, a glimpse of the old times.