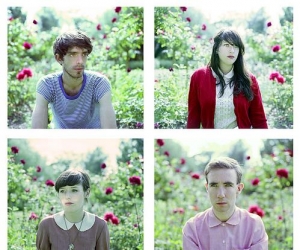 Recorded with Rory Attwell (Male Bonding, The Vaccines), Waiting For Something To Happen is a bold and deliciously assured leap forward for Veronica Falls, which sees the quartet of Roxanne Clifford, Patrick Doyle, James Hoare, and Marion Herbain easily throw off the tongue in cheek references to ghostly romances and suicides to elegantly distill the essence of an aimless twenty-something existence – the collective anxieties, tensions and confusion of moving from adolescence into fully fledged adulthood.

Indeed, the emotional throughline, from the title down, is one of slowly coming to terms with the process of growing up and eventually learning to face adult responsibility, of leaving behind the safe haven of “driving late at night, I’ll let you listen to the music you like” (as they sing on the dreamy, dewy-eyed “Teenage”), and then searching for a “shooting star to point me in the right direction” (“Shooting Star”). Far from retreading the playful atmosphere of the debut, the band here mine a much more rich, emotionally resonant vein, be it weariness with dead end social scenes (“So Tired”), or the fear of your peers leaving you behind before you’re ready (“Everybody’s Changing”).

The tour will coincide with a limited 7″ vinyl release of one of the albums many highlights ‘Broken Toy’, which comes with an unreleased demo of ‘If You Still Want Me’, and is due to be released on October 22nd.