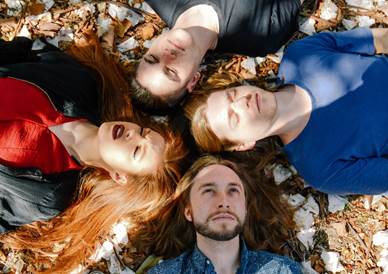 From the opening noir-ish beats of ‘My Last’ to the final hypnotic notes of ‘Mirrored’, every corner of ‘Play’ is invigorated by the intrepid, evocative production of late 60’s psychedelia. Bandmates Shen, Nick GK and Joe Wood have already received critical acclaim and support from the likes of NME and BBC Introducing for their infectious blend of psychedelic rhythm & blues, performing under previous outfit Venice Trip. Stretching into even more ambitious, beautifully turned pop music here with Mellow Gang, they deliver spellbinding instrumentation as sensuous as the best of Beach House and Tame Impala.

These four heavy-hearted melodies are not to be mistaken for a romantic ode: Mellow Gang’s music transmits the emotional complexity of mental health with stunning acuity. “It really had to provoke something that not everyone might be comfortable with,” lead vocalist Harriet Joseph tells us, “In a backlash period where I shut down creatively, I not only became aware of the effects on me but recently some nearest and dearest. Fears develop of boredom, complacency, stillness, imitation, opposition, addictions and then even nothing at all. I felt it across people I knew, but no one went there or talked about it.”

It’s an intoxicating sound led by Harriet’s husky tenor. She fills these slow, atmospheric songs with theatrical melancholy, casting haunting shadows across the doleful ‘Mirrored’ while ‘Vendetta’ – the achingly beautiful new single – simmers with tension and obsession. Lana Del Rey comparisons are inescapable when her cool detachment wells up into a wail of emotional anguish on ‘My Last’. She sounds tragic and beautiful throughout, luxuriating in a bleak space between dream and reality that makes ‘Play’ feel both classically old and refreshingly new.