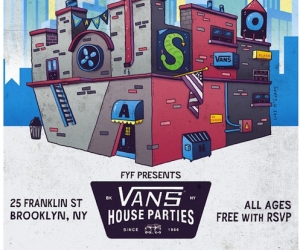 House of Vans in partnership with FYF announce the return of the third annual, free summer concert series, Vans House Parties. The first installment of the series will kick off live from the House of Vans (25 Franklin Street) on Thursday, June 27 with performances by Fucked Up, Title Fight and Hop Along. Additional House Parties throughout the summer will feature performances from Toro Y Moi, Shlohmo, !!!, Jacques Renault, The Melvins, Baroness, Kid Dynamite, Les Savy Fav, Delorean, and more. Full schedule below:

The Vans House Parties have become an integral part of the New York concert landscape. All shows are free with RSVP, open to the public of all ages and held at the House of Vans, a 25,000 square foot renovated warehouse in the Greenpoint neighborhood of Brooklyn, NY. Doors for all shows will open at 7 p.m. Vans House Parties are free and open to the public with RSVP, but we suggest early arrival to ensure entry.

About Vans & Music
The House of Vans, the cultural hub for the original action sports shoe and clothing maker, is located at 25 Franklin Street in the Greenpoint neighborhood of Brooklyn, NY. Along with an indoor concrete bowl and outdoor skate plaza, this window into the world of Vans includes a permanent stage for concerts and enough space to virtually do anything our imaginations allow. 2013 marks the third year of Vans and FYF’s acclaimed Vans House Parties, the go-to free summer concert series in New York.

Vans supports original and creative music acts ranging from Band of Horses to Public Enemy to Turbonegro by bringing memorable shows to global audiences at the House of Vans roving music venue that echoes Vans’ Brooklyn-based cultural hub and to more than half a million fans each summer at the Vans Warped Tour, America’s longest-running music tour. Shoe and clothing collaborations with Pearl Jam, Iron Maiden, Iggy Pop, Descendents, KISS, Social Distortion, No Doubt, Slayer and Metallica are among the many coveted projects that suit an “Off The Wall” lifestyle for music fans everywhere.