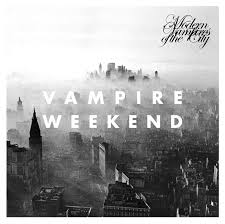 Modern Vampires of the City is Vampire Weekend’s third album, and it will be released on May 14th, 2013 by XL Recordings.

The album title is inspired by the first line of Junior Reid’s song “One Blood”: Modern vampires of the city hunting blood, blood, bloooooooood The photo on the cover was taken in 1966 on one of the smoggiest days in New York history. It was captured by photographer Neal Boenzi for the New York Times.

Ezra and Rostam, the songwriting team behind the band, worked more closely than ever on this album. Most songs began one of two ways: either with Rostam creating a piece of music that often included drums, bass, and chords and sending this to Ezra to write lyrics and melodies on top of, or with Ezra beginning the song by writing lyrics and melodies, sometimes chords as well, and the two of them sculpting the instrumental setting for the track around those.

In the summer of 2012, the two traveled to LA to collaborate with Rostam’s longtime friend, and fellow producer, Ariel Rechtshaid. They brought with them writing and recording sessions from New York and Martha’s Vineyard. The three began to stride towards realizing the finished album and were later joined by drummer Chris Tomson and bassist Chris Baio. Drums and bass were recorded to analog tape at Vox Studios. Built in the 1930’s, it’s one of the oldest privately owned studios in Los Angeles. Those parts were then reintegrated with the sessions and further manipulated to create a synthesis of sound and tone, both old and new.

The album has a grandeur and romanticism evocative of the city where it was conceived. Church organs, deep synth bass, booming drums, choirs chanting in Latin are all combined with classic Vampire Weekend joyfulness and spry humor.
MVOTC is the culmination of a trilogy.

The genesis of the song “Step” was a labyrinthine journey through American pop history: it was inspired by a lyric from 90s New Jersey rapper YZ artfully sampled by Bay Area hip-hop legends Souls of Mischief for a demo called “Step to My Girl” from the sessions from their “’93 Til Infinity” album. Their song sampled a Grover Washington Jr. cover of 70s soft-rock band Bread’s “Aubrey.” Vampire Weekend’s song marries melodies from “Aubrey” with their own harmonic and lyrical identity and rhythmic swagger.

Modern Vampires is a bustling city of voices and visions — from the death of Henry Hudson to the Orthodox girl falling in love at an uptown falafel shop, from Hannah Hunt tearing up the New York Times on a distant beach to the lethal chandelier of “Everlasting Arms”, from the ardent yearning of “Don’t Lie” to the harmonized voice of hope in “Young Lion”.

DON’T LIE
It began during a writing retreat to Martha’s Vineyard with Rostam recording Hammond organ chords over cut-up drums while Ezra took a walk through a forest with a legal note-pad, jotting down lyrical ideas.

Ezra: “I think this is one of our most passionate songs. Rostam’s descending organ chords really moved me when I first heard them. First image that came to mind was knees falling to the ground.”

Rostam: “We revised the ending several times and eventually decided to break the song down to just us singing over bass and drums, and then build things back up from there.”

The finished song explores the wide range of some of Rostam’s compositional interests: thundering Boom Bap drums, interlocking harpsichord and string lines, and a guitar outro that recalls 60’s soul.

Rostam: “The drums were recorded to tape and are—for the most part—a real performance by CT. Sometimes I treated his performance like a break beat, cutting it up and repeating beats to recapture the fucked up feel of the original drums I’d sketched in in Martha’s Vineyard. Ariel invited Lee Smith, who delivered the drums for Nirvana’s Nevermind to be our drum tech for the day and we also had Dave Schiffman who’s worked on Rage Against The Machine records there as engineer. We mic’d the drums to capture the sound of the room more than anything, we wanted to hear each hit bouncing off the linoleum floors and the old, cardboard walls of Vox.”

The last thing recorded for the album were the outro guitars.
Rostam: “I wrote the guitar parts very quickly sitting in front of an open window. I liked the idea that this song would end in a very different place from where it started. I was thinking about how John Lennon might have played guitar on the song.”

HANNAH HUNT
Ezra: “I started writing it in college but it took 7 years to for us to finish arranging and recording it which, somehow, feels right for this song.”

Rostam: “We decided to keep the song as minimalist and open as possible, using only the two of us singing in harmony to flesh out the choruses. At some point I had the idea that the song could break out into a loud section and quickly laid down a pentatonic piano melody, some organ, and slide guitar. My takes were sloppy but we kept a few of them in the final version of the song because they had the right feeling to them.”

EVERLASTING ARMS
The whole track is pumping like French House. Some of the woodiest sounds ever in a Vampire Weekend song and yet one of Ariel and Rostam’s most contemporary productions.

Rostam: “I was thinking about Motown basslines and how they move when I wrote the music for the chorus of this song.”

FINGER BACK
Rostam: “The drum parts I wrote for this song alternate between patterns that are like Hallelujah Chicken Run and stuff from the Clash, sometimes within the same measure. Chris turned these parts into a mad-cap performance with a ton of spirit and energy.”
The Orthodox girl falling in love with the guy at the falafel shop is a true story.

YA HEY
Rostam: “We talked about things we loved about Jamaican music. Wanting to carry those things with us without leaning on a typical reggae groove. When the song gets into its final chapter, I wanted us to explore those choral cluster harmonies that you hear on Bjork’s album Vespertine.”

WORSHIP YOU
An epic onslaught, exploring the intersection between Irish and Persian music. Swooping 808s explode beneath tumbling snares and strummed guitars.
Ezra: “Irish music has always been an influence on Vampire Weekend. This one started out very simply – it almost had a Clancy Brothers vibe. For a variety of reasons, I’ve always seen Irish folk songs like “Danny Boy” or “The Wind that Shakes the Barley” as a kind of songwriting ideal.”

HUDSON
1611: After his crew mutinied, Henry Hudson was left to die in what is now called Hudson Bay.
A result of multiple collaborations within the band, the A section of the song was initially written by Ezra during a period of isolation in rural Long Island, the descending B section by Rostam when the two worked together in Martha’s Vineyard, and the music for the C section came from a collaboration between Ezra and drummer Chris Tomson in New York.
Influenced by 60’s French pop and Leonard Cohen.

YOUNG LION
In the stressful final weeks of finishing Contra, Ezra was anxiously walking to the studio when a complete stranger stopped him, smiled and said “You take your time, young lion.” When he met Rostam at the studio, he told him about this strange encounter. Shortly thereafter, Rostam wrote this song. It’s now the coda to MVOTC —a final message of hope. Like the synth solo in “Worship You”, the winding piano melody of this song was inspired by the Persian folk music Rostam grew up listening to around the house.
The first Vampire Weekend song sung entirely by Rostam.