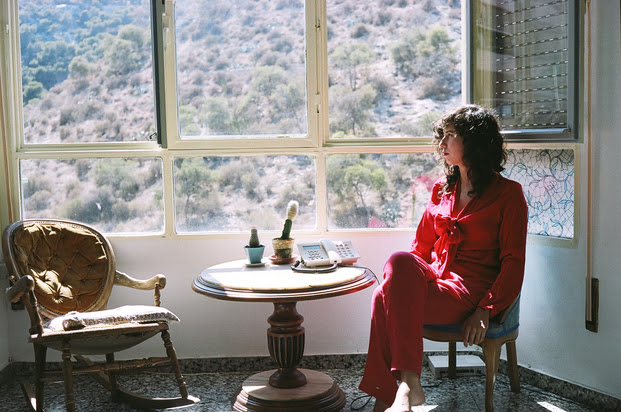 Formerly of new wave outfit Selebrities, Ecuadorian-born, Brooklyn-based Maria Usbeck returns with her debut album Amparo, a collection of songs written and recorded across the span of three years in Ecuador, Buenos Aires, Santiago, Barcelona, Lisbon, Easter Island, Costa Rica, the south of Florida, L.A. and her home in Brooklyn. Produced by Caroline Polachek (BEYONCÉ’s producer and member of CHAIRLIFT) it is fleshed out in full sonic color on the marimba, xylophone, quena flute, piano, and harp, the album stretched out into something hi-fi and expressive, meditative but not meandering. The new single “Uno De Tus Ojos” is our ‘Song of the Day’.

Amparo stems from Usbeck’s desire to compose in Spanish, her  native language. Growing up in Quito, Ecuador, Usbeck was immersed in salsa, merengue, bachata, and Andean music, but was more attracted to German and American culture than to her own, and  moved to America by herself at 17. After five years of fronting new wave outfit Selebrities and writing songs in English, Usbeck experienced a delayed onset homesickness and knew it was time to “let the mother tongue speak.” The impulse manifested itself directly: Amparo takes its title from Usbeck’s middle name and her mother’s name, and translates roughly as “to guide, protect, and embrace.” Usbeck wields her Spanish lyrics cleverly while folding in snippets of several other far-flung tongues: Rapa Nui from Easter Island, Quichua from Ecuador, Bribri from Costa Rica, and Catalan. Because these lyrics were composed while visiting the countries from which they originate, their usage is more impressionistic than literal, like a mockingbird imitating fragments of other birdcalls. Similarly, Usbeck reinterprets the Ecuadorian music that she grew up with as a newcomer, returning home with fresh ears, and as such the sounds are very much her own.

The backbone of Amparo is percussion, vibrating throughout with timbales, tumbas, a talking drum, bongos, shakers, and an Indian flat drum, with the gaps filled in by her field recordings of birds, beaches, and jungles. The songs were written and recorded chronologically, with the exception of the closing track, a cover of Colourbox’s “Tarantula” reimagined in Usbeck’s Spanish translation. Amparo is a reflection of the textures of Usbeck’s childhood. It is also a distinctly grown-up pop record – a travel diary, music made by a visiting outsider to tap into a shared core of human expression. Amparo is released May 27 via Labrador in Europe, Cascine in North America and Rallye in Japan.