Dark and dreamy duo Ultra Violent Rays have channeled the spirit of legendary pop artist Roy Lichtenstein with their colorful new video for their single, “Wish.” According to MoMA.org, Lichtenstein was an “American painter, sculptor, printmaker and decorative artist whose paintings based on comic strips and advertisements made him one of the central figures of American Pop Art.” The visually intriguing video for “Wish” was directed by Patrick Flaherty, while Janica Polmanteer did the complex makeup.

The dark and dreamy duo of Cooper Gillespie (vocals and bass) and Greg Gordon (drums and sequences) specialize in “spaced-out, shimmering, hypnotic soundscapes.” Ultra Violent Rays describe their sound in a way that is representative of the band’s creativity and ability to intrigue audiences.

“Imagine Philip K. Dick howling at a pale and dangerous moon while Siouxsie Sioux does a rain dance around him. Instead of rain, rainbow-colored fire falls from the sky, consuming everything, and leaving only a net of blue, grey regret. Though we live in the cosmic dark, our live show is a gigantic psychedelic wave of color, light, and sound.” 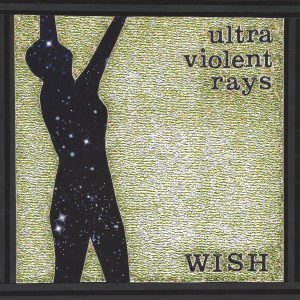