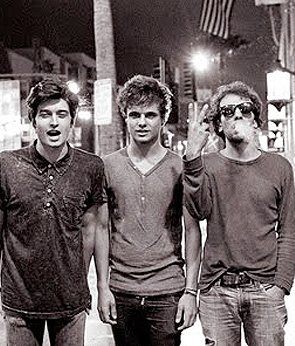 London trio, New Ivory released their album, Amygdala Circus on Dim Mak Records on February 5th. The band has been described as a mixture of New Wave, Psychedelic and Punk.

When compared to their first EP Arrows and Slings, the band stated, “it still has all of the catchy hooks we previously had but we’ve matured and crafted an album full of singles and pop-rock songs, still maintaining our British sound.” The band is made up of members Mickey (vocals, lead guitar), Alessandro (bass) and Andy (drums).

The new album, Amygdala Circus was mixed by GRAMMY nominated producer, Joe Marlett, better known for his work with Blink182, Foo Fighters, and Queens of the Stone Age. Head of Dim Mak Records, Steve Aoki hails the record, saying, “the album New Ivory just finished is incredible and their live show is great. I love this band, Mikey’s voice and lyrics, and their song craftsmanship.”

The band that has toured with 30 Seconds to Mars, You and Me at Six, and Wombats. Upcoming March, they will perform at SXSW as well as extra dates still to be announced.