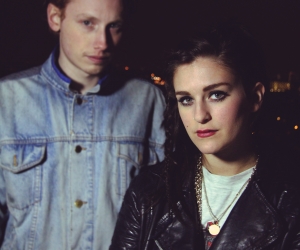 Amelia Rivas and Christian Pinchbeck don’t just sing about feverish, frayed and  fractured romances – in the three years since forming  Elephant, they’ve been living one.

Their first recordings, recorded in the strung out early mornings after the night before, were delirious and light-headed. Rivas’ stream of conscious lyricism combined with Pinchbeck’s innate melodic nous to create vignettes of delight and wonder.  A debut single followed, 2011’s “Woozy Ants,” followed by the Assembly EP.   But before they had a chance to move forward, the duo’s relationship broke down, almost to the point of no return.

That seemed to be Elephant’s graveyard. Yet an unexpected rapprochement in late 2012, and a renewed musical hunger saw Rivas and Pinchbeck reconcile. The first fruit was this year’s new single “Skyscraper,” which announced their return in spectacular fashion, with Rivas’ swooping vocals allied to a spectral chorus creating an eerie, lens-flared 3 minute wonder of song.

A: Shapeshifter
B: Snow Day