twst, AKA: Welsh songwriter, vocalist and producer Chloé Davis, recently shared the AmPm x FUNTYME remix of her track “sad girls club but u gotta be cute.” twst’s debut EP, TWST0001, is scheduled for release on May 15.The EP will feature previously released tracks, including “Are You Listening?” “Always” and “Girl On Your TV,” all of which she co-produced with Danio Forni. The track follows a previously shared remix of the same song by Tayhana—listen here—and remixes of “Girl On Your TV” by Clams Casino—listen here, and Strict Face—listen here.

Born and raised in Barry, Wales, twst grew up working in her father’s chicken factory. At 14, she left home and formal education and relocated to a recording studio in the South Wales Valleys where she began teaching herself about music production and pop culture. Now based in London, twst writes, produces and directs all of her music and videos, mostly within the four walls of her bedroom, and frequently collaborates with other creatives she has befriended from London’s close-knit music community.

Masked DJ duo AmPm debuted to worldwide acclaim in 2017 with the track “Best Part of Us.” Since, the duo has performed at major live events—including ULTRA in Miami, Korea and Japan—remixed tracks for Afrojack, Nicky Romero and R3HAB and lent production help to artists such as Ken Hirai and V6. 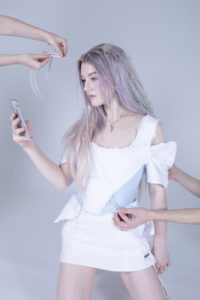