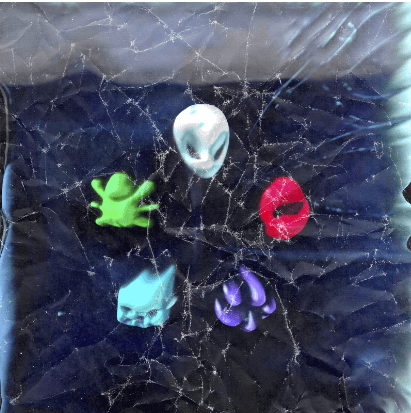 Enigmatic London twosome Two Shells are riding the crest of a wave at the moment. Having wowed Glastonbury and played a jam-packed Boiler Room set recently, the pair have dropped their latest EP ‘Icons’.

‘Icons’ is a fidgeting mix of composite sounds and styles assembled under the banner of dance music, melding together house, techno and dub into a giddy, mind altering concoction. Escapism and hedonism reign supreme throughout the EP’s ever-evolving five tracks, as each song operates within its own microcosm but creates a symbiotic relationship with the next euphoric rush that follows it. It feels like Two Shells have forged their own living organism, as the listener witnesses the EP’s sound evolve and respawn over 25 minutes. Wordless vocal ticks conjoin with glitchy nuances throughout the EP’s lifespan, ensuring a fidgeting, infectious energy is omnipresent. The addition of thumping bass and scattergun percussion only fuels ‘Icons’ engine room further. As the EP develops, those disembodied voices start to manifest, like an operating system coming to life. ‘Dust’ in particular ripples with a palpable kinetic energy, as if AI has taken over and androids are staging their own carnival, supported by circuit-board twitches and pulsing, body-moving flourishes.

‘Icons’ ebbs and flows as you’d hope and expect for a sweaty, high energy dance record; it’s almost impossible not to picture a heaving sea of revellers, arms loft, splashed in day-glo paint losing their collective minds to Two Shell’s techno infused house. This idiosyncrasy is evident during ‘Mainframe’, the EP’s closer that channels rave-era Prodigy, thanks to it colossal beats and punkish attitude. Hefty surges of angelic vocals, woozy pockets of euphoria and electrified stomps ratchet up the intensity levels one last time, which is a feat in itself given how vibrant ‘Icons’ is from the word go.

‘Icons’ pulsating electronica is threatening to be the soundtrack to the summer for all you dance music heads out there.