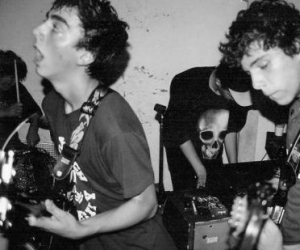 Twin Peaks’ debut record, Sunken, is coming out July 9th on Autumn Tone, and here’s another taste of guitar-pop perfection in their new single, “Irene.” It’s a groovin’, gentler peek at the density of hits that fill this brief but brilliant album. “Irene” is as close to a love song as these 19-year-olds have on Sunken, though if you listen to the lyrics, there’s a darker undertone. It effortlessly achieves the starry-eyed vibe we all hope for from summer jams, with an airy guitar line floating gracefully above a shuffling drumbeat, while the words convey a yearning to understand a complicated and messy situation.

Also, aside from having played the Chicago Reader’s Best of Chicago party at Metro last night (they were voted “Best Hyped Youngsters Who Can’t Play Your Neighborhood Bar” by the Chicago alt-weekly), they’ll be playing their RECORD RELEASE SHOW at Schuba’s on July 24th with friends Sister Crystal and Today’s Hits.