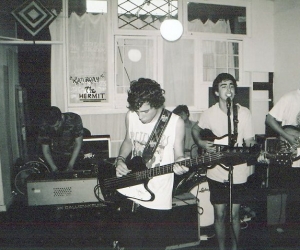 The Twin Peaks Dudes will be touring their youthful asses off, having joined up for dates with Foxygen and future shows with Bleeding Rainbow, as well as some headlining dates, which will feature their first headlining show in New York. The band’s profile has been bubbling up over the course of the last 6 months. Anyone who has seen them live can attest to power they bring to the equation, so it’s no surprise that they sold out their record release show in Chicago last week.

To commemorate their current West Coast tour, guitarist Clay Frankel (he’s the one who was briefly enrolled in the USC film program before dropping out for the band) made this impromptu tour promotional video. Let’s all drop out and join the band on the road!